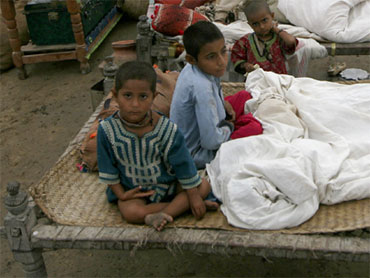 Pakistan will have to demonstrate it can spend relief funds transparently and well if it wants more help in rebuilding after its massive floods, the U.S. aid chief said, as officials in the northwest vowed Wednesday to stop banned Islamist groups from helping victims.

America has been the most generous contributor to the flood aid, rushing in emergency assistance to support a vital ally in the war against al Qaeda and Taliban. But rebuilding homes, roads, livelihoods and vital infrastructure will cost billions of dollars, and there are questions over who will pay.

The Pakistan government says about $800 million in emergency aid has been committed or pledged so far. But there are concerns internationally about how the money will be spent by the government, which has a reputation for inefficiency and corruption.

Rajiv Shah, administrator of the U.S. Agency for International Development, said the United States would continue to urge nations to donate.

"We are going to work at it, but these are tough economic times around the world and it will require a demonstration of real transparency and accountability and that resources spent in Pakistan get results," he said in an interview with The Associated Press late Tuesday.

Brig Gen. Michael Nagata told CBS News that the U.S. has delivered over 1 million pounds of relief supplies, with an emphasis on increasing the number of helicopters to reach resident accessible only by air.

"The first thing I've noticed is the Pakistani civilians... they are impressed when they see Pakistan and the U.S. military working together on these landing zones and shepherding civilians who need recovery," Nagata said.

The floods began almost a month ago with the onset of the monsoon and have ravaged a massive swath of the country, from the mountainous north through to its agricultural heartland. More than 8 million people are in need of emergency assistance.

Along with the government, local and international agencies and the U.S. military, a number of Islamist groups have been providing aid to flood victims. At least one of the groups is alleged to be a front for Lashkar-e-Taiba, a banned militant organization blamed for the 2008 attacks in Mumbai, India.

The government in the northwest issued an order Wednesday barring banned Islamist groups from operating relief camps, said Mian Iftikhar Hussain, the chief spokesman for the province. But it was unclear whether any such camps had been shut down by Wednesday evening or how exactly the government was going about identifying them.

"We don't want these militants or these banned groups to give relief to the flood affectees and take advantage of the sympathies of the local people and then destroy the whole nation," Hussain said. "We will not allow this at any cost."

Some of the routes along which trucks carrying supplies to U.S. and NATO troops in neighboring Afghanistan travel have also been affected by the floods. A spokesman for international forces in Afghanistan said supplies had been slowed down but there had been no impact on operations.

The United Nations said some 800,000 people had been cut off by the floods and were only accessible by air, a measure of the scale of the disaster. It said 40 more heavy-lift helicopters were urgently needed. The U.S. military has dispatched 19 choppers so far.

Before the disaster, the U.S. had pledged to spend $7.5 billion over the next five years for projects including improving schools and hospitals, building dams and helping the country generate electricity.

Shah said much of that package would now be spent on flood rebuilding. Teams are still assessing the damage to figure out the exact costs.

"That is absolutely what is required in order to meet the needs of the Pakistani people," Shah said.

He noted that much of the spending is already earmarked for the energy, agricultural and water sectors, all three of which were affected by the floods.

"If you think of just those three areas, going forward I suspect they would be more important," he said. "I think we will end up moving even more aggressively in that direction."

The death toll in the floods has been around 1,500 people but the disaster ranks as one of Pakistan's worst ever because of the scale and massive economic damage, especially to the country's vital agricultural sector.

In the south, authorities were still battling high rivers and new floods were reported in low-lying areas.

Saifullah Dharejo, the irrigation minister for Sindh province, said high tides were preventing the bloated Indus River from quickly emptying into the Arabian Sea as had been hoped.