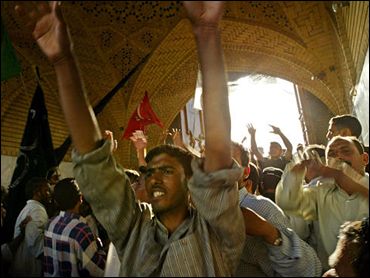 Military and intelligence officials say they are watching for signs that Iran might be promoting anti-American demonstrations or other challenges to U.S. authority in an effort to exert influence in a new Iraq.

At this point, the chief interest of the Iranians appears to be in gathering information and making contacts inside a neighboring country that has been largely closed to them for years, according to a U.S. intelligence official who spoke Wednesday on condition of anonymity.

"Right now, the Shiite and any Iranian-influenced Shiite actions are not an overt threat to coalition forces," said Lt. Gen. David McKiernan, U.S. commander of land forces in Iraq.

"But we're watching all these competing interests," he said. "And if truth be known, this is probably a little bit of democracy in progress right now in Iraq."

On Thursday, Iran rejected U.S. accusations that it is interfering in Iraq.

Foreign Minister Kamal Kharrazi told reporters Iran had no intention of backing Iraq's Shiite Muslims, thousands of whom staged anti-U.S. demonstrations in the holy city of Karbala on Wednesday.

"They are our religious brothers," Kharrazi said of Iraqi Shiites. "We welcome true democracy and a government run by the people in our neighbor country, but we won't support one specific party."

Earlier this week, U.S. Marines began patrols along the Iran-Iraq border in order to apprehend fleeing Iraqi officials, help Iraqi exiles who are returning home, and block the entry of potential troublemakers.

U.S. officials say they are monitoring Iran — a Shiite Muslim state — in hopes of deterring any encouragement of anti-American militancy among Iraq's Shiite majority.

While some Iranians have crossed into southern Iraq, most of the Iranian agents are themselves Iraqis, the U.S. official said.

There is no conclusive evidence linking the Iranian government to anti-U.S. demonstrations, but officials say they are watching closely for such activity.

Presidential spokesman Ari Fleischer said the administration has warned Iran not to interfere in Iraq.

"We have concerns about Iranian agents in Iraq," he said. "We have made clear to Iran we oppose any outside interference in Iraq's road to democracy."

The Iranians are also investigating the Mujahedeen-e-Khalq, a group backed by Saddam Hussein's government and one that opposes the theocratic government of Iran, the intelligence official said.

The group has conducted armed incursions into Iran and claims thousands of Iranian fighters have crossed into Iraq to attack them.

While President Bush's administration has criticized the Iranian government as supporters of terrorism, it also bombed the Mujahedeen camps in Iraq during the war. The group, labeled a terrorist organization by the State Department, says it did not fight the U.S.-led invasion and appears to have capitulated.

Iraq, under Saddam, fought a war with Iran through most of the 1980s.

In 2002, Iran also took steps in Afghanistan — on its opposite border — after the Taliban fell. It built roads, donated buses and granted scholarships to Afghans to attend Iranian universities.

The Tehran-based Supreme Council for the Islamic Revolution in Iraq opposes a U.S. administration in Iraq, but it has close ties with the rest of the U.S.-backed opposition, including the Kurds and the London-based Iraqi National Congress.

The group boycotted a U.S.-led meeting near the southern Iraqi city of Nasariyah last week that was meant to pave the way for a new Iraqi administration.

The Bush administration's warning to Iran follows tough talk over the past few weeks to Syria, another neighbor of Iraq that the U.S. accused of trading weapons with Saddam's regime and harboring members of the deposed ruler's cohort.

While Mr. Bush has said he hoped the war in Iraq might foster a spirit of democracy and rejection of terrorism across the whole Middle East region, Iran and Syria have been under particular scrutiny. Both are alleged sponsors of the Hezbollah guerilla movement.

Iran, along with Iraq and North Korea, was labeled by Mr. Bush a member of an "axis of evil."

In a speech to a pro-Israel group in late March, Secretary of State Colin Powell warned that "Tehran must stop pursuing weapons of mass destruction and the means to deliver them," and that if Syria continued backing terrorists it would bear "the responsibility for its choices, and for the consequences. "

Syria denied the charges. Some influential outside advisers warned that U.S. could use military force, but the Pentagon never said that it was considered.

Last week, the U.S.-Syria rhetoric cooled. The president said Damascus was cooperating and Powell announced he would visit the country.

In an interview with Newsweek magazine, Mr. Bush said military action was not being considered against any other countries in the region.

"I have no specific operation in mind at this point in time. I can't think of a specific moment or a specific incident that would require military action as we speak," he said.

But former House Speaker Newt Gingrich, in a speech this week to the conservative American Enterprise Institute, said the U.S. was taking too soft a line on Syria.

He said Powell's decision to meet "with a terrorist-supporting, secret police-wielding dictator is ludicrous."