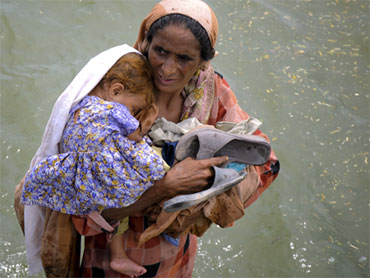 The United States will increase its aid to flood-ravaged Pakistan to $150 million, U.S. Sen. John Kerry said Thursday, stressing that Washington did not want Islamist extremism to increase on the back of the crisis.

The floods have affected 20 million people and about one-fifth of Pakistan's territory, straining its civilian government as it struggles against al Qaeda and Taliban violence. Aid groups and the United Nations have complained foreign donors have not been quick or generous enough given the scale of the disaster.

The United States has deployed 18 Army helicopters to hard-hit areas and given other aid worth $90 million.

U.S. Sen. John Kerry, who is visiting Pakistan to see the flood damage, said that would increase to $150 million. The figure is expected to be announced at a U.N. general assembly meeting in New York on Thursday.

Many need help now, but unlike in previous disasters, relief for Pakistan has been much slower to come, reports CBS News Correspondent Richard Roth.

"Although governments have been coming forward with increasing generosity, the public response has not been the immediate outpouring of generosity that we've seen for Haiti and the tsunami five years ago," the U.N. Under Secretary John Holmes said.

Saudi Arabia said it would donate $80 million to Pakistan, the official Saudi Press Agency reported, making it one of the largest donors. The country has for years sought to project its influence in Pakistan and has funded the spread of hardline Islamic theology there.

Pakistan is vital for America's strategic goals of defeating militancy and stabilizing neighboring Afghanistan so its troops can one day withdraw. Washington has already committed to spending $7.5 billion over the next five years in Pakistan.

Recovering from the floods is likely to dominate the agenda of Pakistan's army and government in coming months.

The state has been criticized for failing to respond quickly enough, and Islamist charities - at least one of which has alleged links to terrorism - have been active in the flood-hit areas. There are also concerns the extent of the suffering could stoke social unrest and lead to political instability that may impact Pakistan's fight against the Taliban.

The floods began in the northwest of the country after exceptionally heavy monsoon rains and have since swamped thousands of towns and villages in Punjab and Sindh provinces. While rainfalls have lessened, flooding is continuing in parts of Sindh province as water from the north courses down the Indus and other rivers.

Local aid groups, the Pakistani army and international aid agencies have helped hundreds of thousands of people with food, shelter, water and medical care, but the distribution has been chaotic and has not come close to reaching everyone.

Officials said that the ancient ruined city and world heritage site Mohenjo Daro in the Larkana district was now at risk. "Our experts are also present at Mohenjo Daro to monitor the flood situation," said government archeologists Qasim Ali.

Mohenjo Daro's structures are mostly made of unbaked brick and are vulnerable to flood damage.