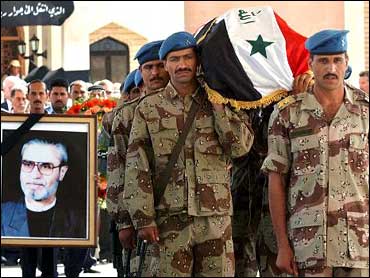 Speaking at a memorial service for Izzadine Saleem, the head of the U.S.-appointed Iraqi Governing Council who was killed by a suicide bomber Monday, L. Paul Bremer, The U.S. governor of Iraq said Tuesday "terrorists are trying to stop Iraq's march to sovereignty and peace."

Bremer insisted that the transfer of sovereignty to Iraqis must go ahead as scheduled despite the killing.

"They will not succeed. We must continue the political process leading to an interim government next month and to elections next year," Bremer said, whose American-run coalition is struggling to contain an insurgency in Sunni areas north and west of Baghdad, as well as an uprising in the Shiite heartland to the south.