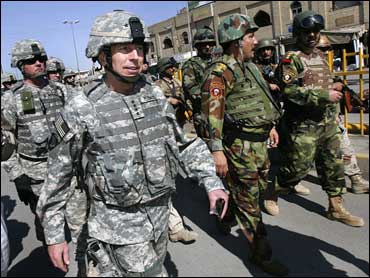 Hundreds of U.S. soldiers entered the Shiite stronghold of Sadr City on Sunday in the first major push into the area since an American-led security sweep began last month around Baghdad.

Soldiers conducted house-to-house searches through the densely populated grid of squat two- and three-story buildings, but met no resistance in a district firmly in the hands of the Mahdi Army militia led by the radical cleric Muqtada al-Sadr, said Lt. Col. David Oclander.

"If you go to Sadr City today you will see joint Iraqi and American troops cooperating with the head of the Sadr City council," Caldwell said in comments translated into Arabic. "There is no problem between the two sides, and we are trying to set up a small security center there."

Al-Sadr withdrew his militia under intense pressure from the government, but there were worries that a large-scale military push without political clearance could bring a backlash and jeopardize the entire security effort.

"The indication that we are getting is a lot of the really bad folks have gone into hiding," Oclander said.

Police said there had been U.S. military activity at the al-Jazair police station in Sadr City since Friday, where troops were thought to be converting the facility into a joint operations center. Bulldozers maneuvered in the station's yard.

U.S. troops, assisted by Iraqi forces, also moved through the Jamila area on the northern edge of Sadr City and sealed off some streets, police said. Last year, U.S. patrols came under frequent attack in Jamila.

A spokesman for Sadr's bloc in parliament, Falah Hassan, said there was "no reason" for such a "provocative act."

"We understood that Iraqi forces only would conduct the search and if that they faced resistance, then U.S. forces could intervene," he said. "But that was not the case with today's operation."

Sadr City presents one of the most difficult steps in the security sweeps that began Feb. 14.

The Mahdi Army's cooperation is essential to keep the plan from derailing, but al-Sadr has complained about the heavy U.S. role in the raids and its inability to stop car bombs and other attacks blamed on Sunni insurgent groups.

"The law must prevail and all Iraqis must be equal in front it, regardless of their religious and ethnic background or political affiliation," al-Maliki said.

Separately, U.S. troops raided a mosque in Baghdad and captured three suspected insurgents hiding inside. The detainees included a man believed to be responsible for distributing weapons to build bombs for attacks on American and Iraqi forces, the military said.

U.S. rules of engagement allow troops to enter mosques only in rare cases.

"We do not enter mosques for the sole purposes of disrupting insurgent activities or conducting a show of force. Mosque entries occur only as a last resort," said Lt. Col. Christopher Garver, a military spokesman.

U.S. soldiers "respect the sanctity and holiness of all places of worship," he said.

During the operation, an Iraqi woman suffered wounds to her thigh and head, the statement said.

Also Sunday, the U.S. military announced that more than 50 insurgents were detained in a three-day operation last month in Salahuddin province north of Baghdad. Three suspected insurgents were killed in the raids, the military said.

At least 10 people died in violence, including three women and a child — all Shiite pilgrims heading to the holy city of Karbala — killed in a roadside bombing in Hillah, about 60 miles south of Baghdad and , police said. Also among those killed was the editor of an independent Iraqi newspaper, who was shot to death during a botched kidnapping attempt died outside his home in western Baghdad, a colleague said.

Also Sunday, a kidnapped Iraqi defense official was freed after Iraqi security forces stormed a house where he had been held, a government spokesman said.

Brig. Gen. Qassim al-Mousawi said Iraqi agents were acting on a tip when they raided a house in western Baghdad near where Lt. Gen. Thamir Sultan, a Defense Ministry adviser, was abducted a day earlier. He was freed, and his four captors were arrested, al-Mousawi said.