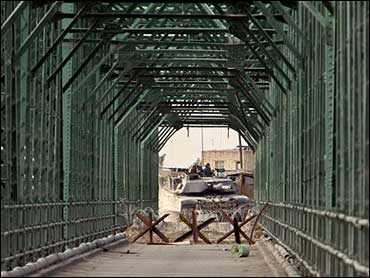 The U.S. military's ground and air assault of Fallujah has gone quicker than expected, with the entire city occupied after six days of fighting, the Marine commander who planned the offensive said Sunday. The military said 38 Americans have been killed in the siege.

Marine Maj. Gen. Richard Natonski said he and other commanders learned from April's failed three-week Marine assault on Fallujah, which was called off by President Bush's administration after a worldwide outcry over civilian deaths. This time, the military sent in six times as many troops and 20 types of aircraft. Troops also faked attacks before the assault to confuse enemy fighters.

"Maybe we learned from April," Natonski said in an interview with The Associated Press. "We learned we can't do it piecemeal. When we go in, we go all the way through. We had the green light this time and we went all the way.

"Had we done in April what we did now, the results would've been the same."

Natonski spoke during a visit to the 1st Cavalry Division's 2nd Brigade, the unit charged with isolating Fallujah under a security cordon.

More than 1,200 insurgents have been killed during the operation, he said.

The offensive has killed at least 38 American troops and six Iraqi soldiers, said Lt. Gen. John Sattler, commander of the 1st Marine Expeditionary Force. The 275 Americans have been wounded, 60 have returned to duty already.

Rebel attacks elsewhere — especially in the northern city of Mosul — have forced the Americans to shift troops away from Fallujah.

Exploiting the redeployment, insurgents stepped up attacks in areas outside Fallujah, including a bombing that killed two Marines on the outskirts of the former rebel bastion 40 miles west of Baghdad.

On Sunday, Marines and Army units were still battling gritty bands of defenders scattered in buildings and bunkers across the Sunni Muslim stronghold. Behind them, Iraqi troops were enmeshed in the painstaking task of clearing weapons and fighters from every room of Fallujah's estimated 50,000 buildings.

U.S. forces now occupy — but have yet to subdue — the entire city. It still could take several days of fighting to clear the final pockets of resistance, the military said.

Early Sunday, U.S. soldiers from Task Force 2-2 of the 1st Infantry Division discovered an immense series of underground bunkers linked by tunnels that insurgents had even stocked with medical supplies, a CNN correspondent embedded with the unit reported.

On Sunday, Marines were expected to reopen the bridge where the bodies of two American contractors killed by militants were strung up in March, sparking the earlier U.S. siege.

"This is a big event for us," said Maj. Todd Des Grosseilliers. "It's symbolic because the insurgents closed the bridge and we are going to reopen it."

Also, Marines in Fallujah found the mutilated body of what they believe was a Western woman. The body was lying in the street covered with a blood-soaked cloth.

A Marine officer speaking on condition of anonymity said he was "80 percent sure" it was a Western woman. Two foreign women were kidnapped last month — Margaret Hassan, 59, the director of CARE International in Iraq and Teresa Borcz Khalifa, 54, a Polish-born longtime resident of Iraq.

In Warsaw, the Polish Foreign Ministry said it was seeking more information.

"Allawi, Fallujah will be your tomb!" some chanted. "You are a coward, an American agent!"

About 300 Iraqi National Guards and a battalion of police from Baghdad patrolled the streets in a visible show of force after an insurgent uprising believed to have been mounted in support of Fallujah's militants.

Planning for Fallujah began in September, with Natonski given responsibility for the combat phase, said Lt. Col. Dan Wilson, a Marine planner with the 1st Marine Expeditionary Force.

After troops uproot the insurgents, contractors are supposed to swarm into Fallujah to cart away rubble, repair buildings and fix the city's utilities, Wilson and Natonski said.

The Iraqi government already has picked leaders for Fallujah, and thousands of Iraqi police and paramilitary forces have been recruited to impose order.

Natonski described the six days of ground war as a "flawless execution of the plan we drew up. We are actually ahead of schedule."

Several pre-assault tactics made the battle easier than expected, he said.

Insurgent defenses were weakened by bombing raids on command posts and safe houses. Air-dropped leaflets also may have demoralized some defenders and convinced some residents the city would be better off under government control, he said.

In the days before the raid, ground troops feinted invasions, charging right up to Fallujah's edge in tanks and armored vehicles. Natonski said these fake attacks forced the insurgents to build up forces in the south and east, perhaps diverting defenders from the north, where six battalions of Army and Marine troops finally punched into the city Monday.

The deceptive maneuvers also drew fire from defenders' bunkers, which were exposed and relentlessly bombed before the ground assault.

"We desensitized the enemy to the formations they saw on the night we attacked," Natonski said.

Another key tactic was choking off the city, the responsibility of the 2nd Brigade of the Army's 1st Cavalry Division, Natonski said.

That prevented insurgents from slipping out during the assault, although many, including top leaders like Jordanian Abu Musab al-Zarqawi, Sheik Abdullah al-Janabi and Omar al-Hadid, are believed to have fled.

"We never expected them to be there. We're not after Zarqawi. We're after insurgents in general," Natonski said.

CBS News Correspondent Elizabeth Palmer, who is in Fallujah, says masked men in a video claiming to represent al-Zarqawi vowed Saturday to take the fight to all the corners of Iraq.