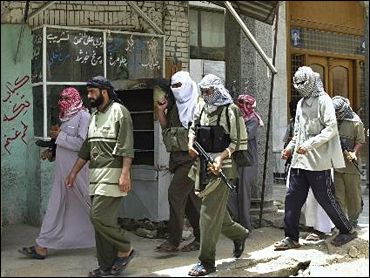 U.S. soldiers backed by tanks and helicopters battled fighters loyal to a radical cleric near a mosque in Karbala Wednesday, hours after Iraqi leaders agreed on a proposal that would end his standoff with the U.S.-led forces. As many as 25 insurgents were killed, the coalition said.

The cleric, Muqtada al-Sadr, urged fighters in Karbala to resist U.S. troops, comparing their struggle to the Vietnam War.

Half of the Mukhaiyam mosque, which had served as a base for al-Sadr's followers, was destroyed and seven hotels were ablaze after tanks opened fire and jets bombed the area. Most of the shops in Tal al-Zeinabiya, a central market, and three ambulances and two military vehicles also were destroyed.

Fighting subsided by dusk as the call for evening prayers spread across the city from loudspeakers at the Imam Hussein mosque, one of the most sacred shrines of Shia Islam.

Special guards manned the gates to the shrine to prevent al-Sadr's fighters from entering. The intermittent sound of explosives and heavy machine gun fire continued as night fell on the city.