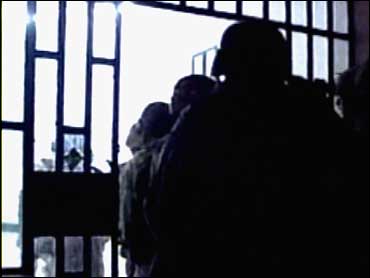 The invasion of Fallujah is underway, with U.S. and allied Iraqi troops taking fire as they battle for position, reports embedded CBS News Reporter Kirk Spitzer from the main hospital in the rebel stronghold.

With the ground-shaking rumble of supporting fire from a U.S. AC-130 gunship in the background, Spitzer had to get off the line because of nearby small arms fire.

Spitzer, embedded with U.S. Special Forces and the Iraqi 36th Commando Battalion, was the first television reporter to enter Fallujah. The troops met mild resistance as they entered the city, and took the hospital without firing a shot.

CBS News Correspondent Elizabeth Palmer, embedded with the 1st Marine Expeditionary Force in the farmland within view of Fallujah, reports the troops are taking rocket and mortar fire from the city as they try to avoid booby-traps while moving under the cover of darkness.

U.S. troops have sealed off Fallujah, 40 miles west of Baghdad.

Dozens of explosions resonated from the city and the minaret-studded skyline was lit up with huge flashes of light.

Flares were dropped over the city to illuminate targets, and defenders fought back with heavy machine gun fire. Flaming red tracer rounds streaked through the night sky from guerrilla positions inside the city.

The Iraqi government has declared 60 days of emergency rule throughout most of the country Sunday.

Under the new law, all men between the ages of 15 and 55 are banned from the streets of Fallujah and surrounding areas 24 hours a day. All traffic is also forbidden.

Fallujah police and security services have been suspended indefinitely. And all roads into Fallujah and neighboring Ramadi have been closed.

Militants dramatically escalated attacks over the past two days, killing at least 60 people, including two Americans.

Commanders warned U.S. troops to expect the most brutal urban fighting since the Vietnam War.

Underscoring the country's instability, several heavy explosions thundered through the capital even as government spokesman Thair Hassan al-Naqeeb was announcing the state of emergency, which applies throughout the country except for Kurdish-ruled areas in the north.

Iraqi interim Prime Minister Ayad Allawi, who called a meeting Sunday with his defense minister, interior minister and provincial police commanders, said the state of emergency is a "very powerful message that we are serious" about reining in insurgents before elections set for late January.

"We want to secure the country so elections can be done in a peaceful way and the Iraqi people can participate in the elections freely, without the intimidation by terrorists and by forces who are trying to wreck the political process in Iraq," he told reporters.

At dawn, armed rebels stormed three police stations in the towns of Haditha and Haqlaniyah, 140 miles northwest of Baghdad, killing 22 policemen. Some were lined up and shot execution-style, police and hospital officials.

Attackers gunned down a Diyala governor's aide and two provincial council members south of Baghdad as they were on their way to a funeral in Karbala for a fourth colleague slain earlier this week.

Three attacks on U.S. convoys in and around Baghdad killed two American soldiers and wounded five others Sunday, the military said. Residents reported grenades setting police cars aflame on Haifa Street in the heart of the capital.

A car bomb also exploded near the Baghdad home of Iraq's finance minister, Adil Abdel-Mahdi, a leading Shiite politician. Abdel-Mahdi and his family were not home at the time but the U.S. military said the bomb killed one Iraqi bystander and wounded another. A U.S. patrol came under small-arms fire as it responded, wounding one soldier, a statement said.

Two British soldiers were seriously injured by a suicide car bomber southwest of Baghdad, while a British contractor was killed in a roadside bombing.

In a Web posting, the al Qaeda affiliate group of Abu Musab al-Zarqawi, believed headquartered in Fallujah, claimed responsibility for the attacks on Haditha and Haqlaniyah.

"In the dawn of this blessed day, the lions of al Qaeda in Iraq faced up to a group of apostates in the proud city of Haditha," said the statement, which could not be authenticated. "The lions stormed the city's police directorate and killed everyone there...With this operation, the city has been completely liberated. The lions have been wandering in the city until late today."

The widespread insurgent attacks seemed aimed at relieving the pressure on Fallujah, where about 10,000 American troops have massed.

The emergency decree lays the groundwork for a severe crackdown in areas where guerrillas operate.

Under the law, all traffic and men between the ages of 15 and 55 were banned from the streets of Fallujah and surrounding areas 24 hours a day.

Government negotiators reported the failure of last-minute talks for peace as Allawi continued to maintain that dialogue with Fallujah leaders was still possible, even if a large-scale military action began.

Allawi, a secular-minded Shiite Muslim, faces strong pressure from within the minority Sunni community to avoid an all-out assault.

"I urge the brother prime minister to reconsider the issue of storming Fallujah and to give another chance for dialogue," Hatim Jassim, a member of the Iraqi National Council, told Al-Jazeera television.

U.N. Secretary-General Kofi Annan and others have warned that a military offensive could trigger a wave of violence that would sabotage the January elections by alienating the Sunni minority that forms the core of the insurgency.

Sgt. Maj. Carlton W. Kent, the top enlisted Marine in Iraq, told troops the coming battle of Fallujah would be "no different" than the historic fights at Inchon in Korea, the flag-raising victory at Iwo Jima, or the bloody assault to dislodge North Vietnamese from the ancient citadel of Hue they seized in the 1968 Tet Offensive.

"You're all in the process of making history," Kent told a crowd of some 2,500 Marines. "This is another Hue city in the making. I have no doubt, if we do get the word, that each and every one of you is going to do what you have always done — kick some butt."