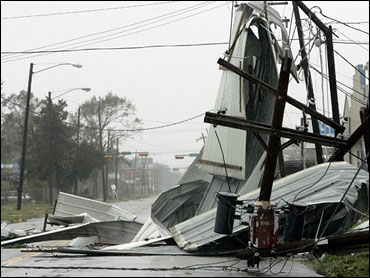 The Pentagon on Saturday was sending about 500 active-duty soldiers to Louisiana and five mortuary teams to Texas to deal with Hurricane Rita.

Troops from the 82nd Airborne were heading to Lafayette, Louisiana, about 135 miles west of New Orleans, to help with search-and-rescue efforts, said unit commander Maj. Gen. Bill Caldwell. He said about 3,200 of his soldiers would be prepared to go to Lafayette by Sunday, if needed.

"Of course, we hope we don't have to use them," Vazquez said from the command's headquarters in Colorado Springs, Colorado. "They are there to assist as necessary."

President George Bush tracked Rita from an Air Force base in the Rocky Mountain foothills, getting reports on flooding, search and rescue efforts and damage caused by the storm more than 1,000 miles away.

In a room lined by eight televisions, video screens and computers, Bush was briefed by federal officials on the military response to the storm.

Bush traveled to the Northern Command to see firsthand how the military was working with state and local officials battling the hurricane.

"I think the damage will be great, but I think the loss of life will be spared," Hutchison told CBS's "The Early Show."

Soldiers from the Fort Bragg, North Carolina-based 82nd Airborne planned to complete their relief work in re-flooded areas of northern New Orleans by late Saturday and then shift to areas of southwestern Louisiana damaged by Rita, Caldwell said.

Caldwell said he was not aware of other active-duty ground forces under orders to go to areas hit by Rita. He said Lt. Gen. Russel Honore, commander of all active-duty troops involved in the Katrina relief work, had moved his headquarters to Lafayette to focus on supporting civilian agencies responding to damage from Rita.

The Bush administration's mass mobilization for the storm sharply contrasted with its widely criticized preparations for Katrina.

"I think at this point the federal government has done pretty much all that's possible to do," FEMA acting director, R. David Paulison Paulison, said. "Right now, we just have to wait out the storm, see exactly where it makes landfall, and then move ahead with our supplies that we have on the ground and our resources."

Anticipating Rita's landfall, FEMA stockpiled four days' worth of food, water and ice in Texas and Louisiana, and the Pentagon added 13,273 active-duty troops to the 36,108 National Guard personnel stationed throughout the region, Paulison said.