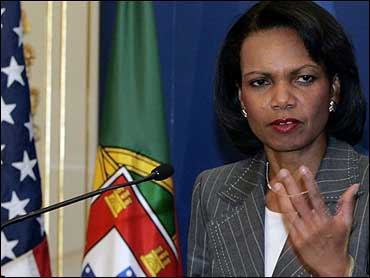 The Bush administration said Monday that a new multibillion-dollar military sales package for Arab nations will help secure Iraq and the Persian Gulf while promoting stability and U.S. influence in a Middle East threatened by terrorism and rising Iranian ambitions.

Embarking on a four-day tour of the region with Defense Secretary Robert Gates, Secretary of State Condoleezza Rice said the proposed U.S. package, estimated at up to $20 billion, "will help bolster forces of moderation and support a broader strategy to counter the negative influences of al Qaeda, Hezbollah, Syria, and Iran."

"We are helping to strengthen the defensive capabilities of our partners, and we plan to initiate discussions with Saudi Arabia and the other Gulf states on a proposed package of military technologies that will help support their ability to secure peace and stability in the Gulf region," she said in a statement.

The new sales to Arab countries, notably Saudi Arabia and other Gulf states, were not enumerated but will be mainly defensive and be balanced with a more than 25-percent increase in military aid to Israel over the next 10 years, enabling the Jewish state to keep its qualitative military edge over neighbors with which it has no peace deal.

Israel will receive a total of $30 billion in U.S. military assistance, up from about $24 billion, while Egypt, which along with Jordan has made peace with Israel, will get $13 billion as part of the broader package.

Specific figures for Saudi Arabia and Gulf nations like Bahrain, Kuwait, Oman, Qatar and the United Arab Emirates, will be determined in the coming weeks, according to Under Secretary of State Nicholas Burns, Washington's third-highest ranking diplomat, who will travel to the region in mid-August for follow-up talks.

Rice said she and Gates, who leave for the Middle East on Monday, would open discussions on specifics on their trip going through broad outlines of military shopping lists with the governments involved. Any sales would have to be approved by Congress, where some lawmakers have expressed deep concerns about their impact on the region and Israel.

In 1986, congressional disapproval helped persuade the Reagan administration to cut back an arms package to Saudi Arabia.

In response to initial news reports about the proposals late last week, Rep. Tom Lantos, D-Calif., said that he and others wanted assurances that "these arrangements include only defensive systems" and rejected arguments by some in the administration that Arab states would acquire the weaponry from other countries if not the United States.

"There is no merit to the general argument that if the United States does not sell arms to these countries, they will go elsewhere and we will lose influence in the region," he said in a statement.

In a Monday conference call with reporters, Burns noted that Israel had on Sunday reversed long-standing opposition to boosting Arab military might and said it understood the rationale behind the plans, chiefly the threat posed by Iran, its alleged drive to develop nuclear weapons and support for terrorist groups.

"The Iran element is one factor, it's not the overriding factor in why we're doing this," and the administration would have pursued such sales even if Iran were not perceived by its neighbors as a significant threat, he said.

At the same time, he put the possible threat from Iran in stark terms.

Across the region, "there is a high degree of concern about Iran's quest to become a nuclear weapons power but also about fact that as you know Iran has armed and funded most of the Middle East terrorist groups," Burns said.

Iran's foreign ministry spokesman on Monday criticized the planned arms sales, saying they would undermine security in the Middle East.

"What the Persian Gulf region needs is stability and security," Mohammad Ali Hosseini was quoted as saying on the Web site of the state broadcasting company. "Americans have been trying to disturb it by selling weapons to the region."

The intended military sales were announced as Washington renews appeals for countries in the region to support its efforts in Iraq and the Iraqi government. Burns denied that the proposed packages were meant to buy backing for Iraq.

"There are no formal quid pro quos in this, but it figures that we would want our friends to be supportive of Iraq," he said.

At the same time, Burns said the sales will help maintain a "very strong American presence and influence in the region" at a critical time.