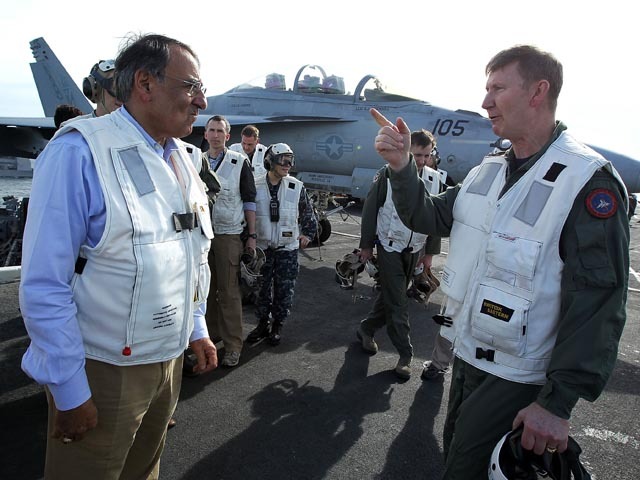 ABOARD THE USS ENTERPRISE - Defense Secretary Leon Panetta told sailors aboard the country's oldest aircraft carrier that the U.S. is committed to maintaining a fleet of 11 of the formidable warships despite budget pressures, in part to project sea power against Iran.

Panetta also told the crowd of 1,700 gathered in the hangar bay of the USS Enterprise that the ship is heading to the Persian Gulf region and will steam through the Strait of Hormuz in a direct message to Tehran.

Iran has warned it will block the Strait, a major transit point for global oil supplies, and bluntly told the U.S. not to send carriers into the Gulf. The U.S. has said it would continue to deploy ships there.

"That's what this carrier is all about," said Panetta. "That's the reason we maintain a presence in the Middle East ... We want them to know that we are fully prepared to deal with any contingency and it's better for them to try to deal with us through diplomacy."

There was speculation that budget pressures would force the Pentagon to scale back the number of carriers, perhaps to 10, and Panetta's predecessor, Robert Gates, questioned maintaining 11 ships.

But Congress has expressed strong support for the current U.S. carrier fleet and has passed a law requiring the Defense Department to maintain 11 of the ships.

After his speech, Panetta told reporters traveling with him that the department will be looking for cuts in other areas. He added, "Our view is that the carriers, because of their presence, because of the power they represent, are a very important part of our ability to maintain power projection both in the Pacific and in the Middle East."

Keeping 11 of the warships, he said, "is a long-term commitment that the president wants to put in place."

Panetta's remarks came amid the roar of fighter jets taking off and landing on the flight deck above, as the Enterprise conducted training operations about 100 nautical miles off the coast of Georgia.

Known as the Big E, the warship and the other six ships in the carrier strike group will deploy to the Middle East in March. Its presence there will allow the U.S. to maintain two carrier strike groups in the Gulf region, where they can support battle operations in Afghanistan, anti-piracy efforts and other missions in the area.

"The Big E is going to be an important symbol of that power in that part of the world," said Panetta, whose tour of the ship included stops on the bridge and the flight deck, as fighter jets catapulted off the ship.

This is Panetta's first visit to a carrier during operations at sea. He was to spend the night on the ship.

The decision to maintain 11 carrier groups, Panetta said, is part of the Defense Department's five-year budget plan that will include $260 billion in savings. Overall, the Pentagon must come up with $487 billion over the next 10 years.

The USS Enterprise, which is based in Norfolk, Va., was built 50 years ago as the first nuclear-powered carrier, and is now the oldest active duty ship in America's Naval fleet. The ship's upcoming deployment will be its 22nd and final tour, after which it is scheduled to be deactivated.

It is being replaced by the USS Gerald R. Ford, which is the first in a new class of technologically advanced carriers. There will be about a 33-month gap before the Ford is commissioned, but Congress has granted a waiver allowing the Navy to drop to 10 carriers for that period of time.

The Enterprise Carrier Strike Group includes the carrier itself, Carrier Air Wing 1, Destroyer Squadron 2, guided-missile cruiser USS Vicksburg, guided-missile destroyers USS Porter, USS James E. Williams and USS Nitze. Together they carry more than 5,000 personnel, with about 4,500 of them on the USS Enterprise. The ship's personnel include fewer than 400 women.

The USS Enterprise has had a long and storied career. In October 1962, it helped set up a blockade around Cuba during the Cuban missile crisis. The Big E, as the ship is called, also was dispatched to the North Arabian Sea after the Sept. 11 attacks, unleashing more than 800,000 pounds of ordnance during the early days of the Afghanistan war.

The White House is in the final stages of deciding specific cuts in the 2013 budget, which President Barack Obama will submit to Congress next month.

A sweeping defense strategy Obama unveiled earlier is intended to guide the budget cutting decisions. The eight-page document contained no details about how broad concepts for reshaping the military — such as focusing more on Asia and less on Europe — will translate into troop or weapons cuts.

The Army and Marine Corps are already planning substantial troop cuts and Panetta said last week that he will slash the number of Army brigades stationed in Europe from four to two.