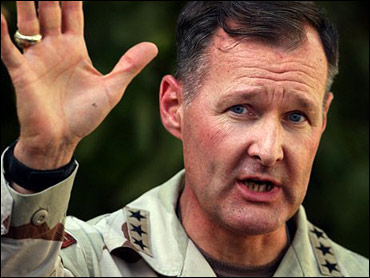 The top U.S. general in Afghanistan promised to tone down his troops' aggressive search for Taliban-led insurgents after a meeting with President Hamid Karzai, the military said Monday.

Already fending off allegations of prisoner abuse, Gen. David Barno agreed that his men would try to kick down less doors and cuff fewer bewildered villagers to ease resentment and foster goodwill, a military spokesman said.

"The coalition recognizes that its forces are guests in Afghanistan," Maj. Scott Nelson said.

Nearly three years after the Sept. 11 attacks, the U.S. military is still searching for al Qaeda chief Osama bin Laden and Taliban leader Mullah Mohammed Omar, but Nelson said the new tactics would in no way hamper the hunt for militants.

The changes will "improve Afghan and coalition cooperation in ridding the country of terrorists," he said.

Local leaders have long complained of Americans and allied Afghan militiamen sweeping through villages in the dead of night, leaving a trail of wrecked property, trampled customs and unfair detentions.

Rights groups warn the heavy-handed tactics may have caused unnecessary deaths and stoked sympathy for Taliban rebels who continue to defy the currently 18,000-strong force under Barno's command.

The military has bristled at such criticism in the past, pointing out that, more than two years after the hardline Islamic regime's ouster, Afghanistan remains a war zone. Two U.S. soldiers were killed by a roadside bomb on Saturday.

But Barno agreed to soften their approach after Karzai called him to his Kabul palace on Wednesday.

The agreement was "very positive," presidential spokesman Jawed Ludin said. "Respect among the Afghan people for the coalition will now increase."

Barno said his forces would consult local officials and tribal elders before starting sweeps. Troops would return seized materials, receive training in "local customs and courtesies" and get elders to ask residents to open their doors before soldiers force their way in.

The U.S. commander also agreed to a raft of measures relating to prisoners — another sore issue since the scandal over abuse of detainees in Iraq drew fresh attention to complaints of mistreatment in Afghanistan.

The military will fund reconstruction projects in areas where people were detained and subsequently released; Afghans will be told to go to the International Red Cross for information on prisoners; and a new Afghan-U.S. body will "resolve detainee issues," Nelson said.

The U.S. military is investigating several allegations that prisoners were abused in its custody in Afghanistan, including at least four deaths. Others say they were beaten and sexually abused.

Barno is expected to present the delayed results of a review of procedures at a secretive network of about 20 holding facilities across Afghanistan later this month. Officials say undisclosed changes have already been made because of its findings.

The prison review and pledge to respect Afghan customs come as the military deepens its involvement in relief operations and providing security for the country's October presidential election.

American troops are focusing on the troubled south and east, leaving NATO-led troops to cover the capital and the north.

Command of the NATO mission passed on Monday to Eurocorps, a five-nation force led by French Lt. Gen. Jean-Louis Py.

Made up of forces from Germany, France, Spain, Belgium and Luxembourg, the European unit relieves Canada from its turn at the head of the 6,500-strong International Security Assistance Force.

Most of the soldiers remain in the capital, but small teams have set up bases in several northern towns this year under a NATO plan to gradually replace U.S.-led troops across Afghanistan.

Italian and Spanish soldiers are to swell the force to as much as 10,000 around the Oct. 9 election to try to prevent attacks by militants.

Twelve election workers and guards have died so far, all in the south and east of the country where guerrillas launch frequent attacks.

The governor of Uruzgan province, a Taliban stronghold, said Monday that his forces captured four regional commanders and killed six other militants in two separate weekend raids on their hideouts.

Gov. Jan Mohammed said the commanders were planning attacks against Afghan and coalition forces. None are believed to be in the inner circle close to fugitive Taliban supreme leader Mullah Mohammed Omar.