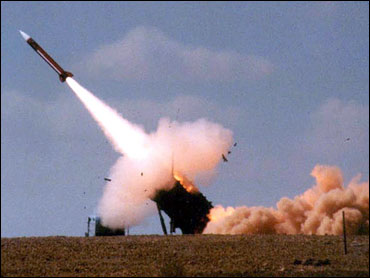 Japan and the United States have agreed to deploy advanced Patriot interceptor missiles on U.S. bases in Japan for the first time, officials said Monday, amid concerns North Korea may test-fire a long-range ballistic missile.

The two sides reached the accord earlier this month and intend to install the weapons as early as possible, a Defense Agency spokeswoman said on condition of anonymity, citing agency rules.

The plan will put Patriot Advanced Capability-3 missiles — designed to intercept ballistic missiles, cruise missiles or enemy aircraft — on U.S. bases in Japan for the first time. A news report, however, said the PAC-3 may be unable to hit North Korea's latest long-range missile.

The Defense Agency spokeswoman said sites and timing for the deployment have not yet been decided.

But a local newspaper reported that the U.S. military would deploy three or four of the surface-to-air missile batteries on the southern island of Okinawa by the end of the year and send an additional 500 to 600 U.S. troops there. Up to 16 missiles can fit in a single PAC-3 battery, according to the system's manufacturer, Lockheed Martin Corp.

The two countries signed an agreement in 2005 allowing Japan to produce PAC-3 missiles for deployment during fiscal 2006 at Japanese bases, but the plan to deploy them on U.S. bases is apparently separate.

Recent intelligence reports have said North Korea may be fueling a Taepodong-2, one of its most advanced missiles believed capable of reaching parts of the U.S., at a launch site on the country's northeastern coast, sparking concerns Pyongyang may soon test-fire one.

However, Japan's defense chief said that it was not clear if fueling is taking place, a news report said.

Defense Agency chief Fukushiro Nukaga said in a speech delivered in Osaka that while "it appears to be a fact that the missile has been mounted on a launch platform," it was unclear if it was being fueled, Kyodo News agency reported.

The comments marked the first time Nukaga has spoken about the missile's state in a public forum, Kyodo said.

The North had maintained a self-imposed moratorium on such launches since 1999. The United States, Japan and other countries have urged North Korea to halt any plans to test the missile, while Pyongyang has insisted it has the right to do so if it chooses.

It was unclear whether the PAC-3 would be effective in the current standoff. The PAC-3 is aimed at complementing the Standard Missile-3 installed on Aegis-equipped vessels. But PAC-3, a medium- to long-range interceptor, may be unable to shoot down long-range missiles such as Taepodong-2, the Yomiuri said.

"There is a growing need to intensify discussions between South Korea and China on North Korea's recent missile issue and the nuclear issue," the South Korean Foreign Ministry said in a statement.

China is the North's key ally and is believed able to exert the most influence on Pyongyang. Beijing has also hosted international talks on the North's nuclear program, which haven't convened since November amid a North Korean boycott in anger over U.S. financial restrictions.

Back in the U.S. the chairman of the Senate Foreign Relations Committee suggested the Bush administration should talk directly with North Korea and said the U.S. should not launch a pre-emptive strike against the missile while it is on the ground.

"It would not be advisable to strike North Korea to take out the missile. It would be advisable to bring about a much greater intensification of diplomacy, and this may involve direct talks between the United States and the North Koreans," Sen. Richard Lugar, R-In., told CBS News' The Early Show on Sunday.

"We're going to have to come to the point where we find at least an agenda to talk to North Korea about and I think we're moving toward that," said Lugar

Sen. Barbara Boxer – who also appeared on Face The Nation – said no options should be taken off the table, but urged President Bush to continue with multi-party talks.

"The kind of diplomacy that we engaged in at first was very tentative, got stronger, got better, got wiser," the California Democrat said. "I say you never take any option off the table, but I think if we can continue to get those countries that North Korea listens to, to keep up the pressure – that is Russia, that is China – we could avoid a serious escalation of this whole matter."

Tokyo and Washington on Friday also signed an agreement to expand their cooperation on a joint ballistic missile defense shield, committing themselves to joint production of interceptor missiles.