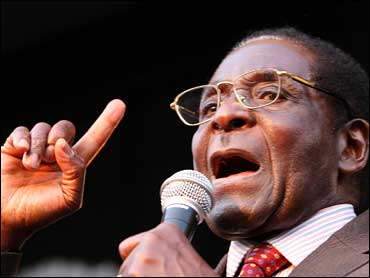 Jendayi Frazer, assistant secretary of state for African affairs, warned in a speech Monday that the U.S. will expand the sanctions further if violence does not cease, saying "Mugabe's tyranny needs to end."

She did not identify the people or the companies affected, but she said they included nine state security officials and five adult children of Zimbabwean government officials studying in the United States.

The United States already has imposed travel and financial sanctions against 130 people with ties to Mugabe. A message left Tuesday with the Zimbabwean Embassy in Washington was not immediately returned.

Given Mugabe's escalated use of violence, "the United States will be imposing additional sanctions against the worst perpetrators of the regime's brutality ... and human rights abuses," Frazer said, speaking at the Center for Strategic and International Studies.

Frazer said it was "intolerable" that those closest to Mugabe should be sending their children to study in the United States "when they have destroyed the once outstanding educational system in their own country." She said the U.S. was particularly watching those using their position "to enrich themselves at the expense of suffering Zimbabweans."

Frazer described Zimbabwe as an imploding country that "remains a powerful blight on sub-Saharan Africa," a region where she said democracy is on the rise and poverty on the decline.

Zimbabwe is embroiled in its worst economic crisis since independence from Britain in 1980. Unemployment is around 80 percent, and political unrest is high. Foreign investment, loans and development aid have dried up.

Official inflation is 4,500 percent - the highest in the world - although independent estimates put it substantially higher. Mugabe, 83, who has ruled Zimbabwe since independence, blames the crisis on Western sanctions and rejects criticism that mismanagement caused the meltdown.

Store shelves are bare of corn meal, meat, bread, eggs, milk and other basics that sell for at least five times the government price on a thriving black market. There are also shortages of fuel and foreign currency as well as soaring poverty.