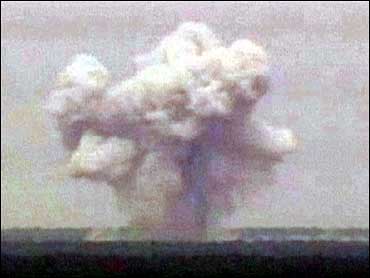 In a flashy debut for its biggest non-nuclear bomb, the Air Force on Tuesday dropped a 21,000-pound behemoth onto a test range in Florida, hoping the test would rattle nerves in Iraq as well.

The bomb test was declared a success, but movement on other fronts in the U.S.-led push toward war was murkier.

The speed with which the Pentagon released video of the test was clearly intended as a warning to the Iraqi military of what they might face if it comes to war, reports CBS News National Security Correspondent David Martin.

At the United Nations, the United States and Britain faced the prospect of defeat for their resolution giving Iraq until Monday to disarm or be invaded, and it appeared they might agree to a short extension of the deadline.

Defense Secretary Donald H. Rumsfeld suggested that even the participation of America's closest ally, Britain, in the combat phase of disarming Iraq was in doubt. Later he appeared to back away from that idea.

"Until we know what the resolution is (going to say), we won't know the answer as to what their role will be," Rumsfeld said of the British military, which is deploying 45,000 troops to the Gulf.

"And to the extent they are able to participate — in the event that the president decides to use force — that would obviously be welcomed," he added. "To the extent they're not, there are work-arounds and they would not be involved, at least in that phase of it."

Asked whether that meant the United States was considering going to war without Britain, he said, "That is an issue that the president will be addressing in the days ahead, one would assume."

Later, after reports that British officials were surprised by the comments, Rumsfeld's office issued a written statement saying his main point in the news conference was that obtaining a second U.N. Security Council resolution "is important to the United Kingdom" and that both countries were working to achieve it.

"In the event that a decision to use force is made, we have every reason to believe there will be a significant military contribution from the United Kingdom," Rumsfeld's statement said.

In London, Blair's office told The Associated Press: "This does not change anything. We are still working for a second resolution. We are not at a state of military combat but there has been complete cooperation between the United Kingdom and the United States throughout on the military planning side."

The U.S. commander who would lead a war against Iraq, Gen. Tommy Franks, met in Amman, Jordan, with King Abdullah II on Tuesday. Franks' office was releasing few details about his schedule, although officials said he was headed to Afghanistan to visit U.S. troops and then to the Persian Gulf. His last stop will be his Gulf command post at Camp As Sayliyah, Qatar.

Over Iraq, two American U-2 surveillance planes flying on behalf of U.N. weapons inspectors aborted their missions after Iraq raised objections. There were conflicting reports on the circumstances. An Iraqi official described the incident as a "technical mistake" by the U.N inspectors; Pentagon officials said it was too early to know who was to blame.

At a joint news conference with Rumsfeld, Gen. Richard Myers, chairman of the Joint Chiefs of Staff, said the number of American forces now arrayed against Iraq exceeded 225,000 and more were en route.

Neither Myers nor Rumsfeld would say whether the 21,000-pound Air Force bomb that was tested for the first time Tuesday would be used in a war against Iraq. It is officially designated the Massive Ordnance Air Blast, or MOAB, although it has come to be called unofficially the Mother of All Bombs, a rough allusion to Saddam Hussein's claim before the 1991 Gulf War that that conflict would be the "mother of all battles."

"Anything we have in the arsenal, anything that's in almost any stage of development, could be used," Myers said.

Cheryl Irwin, a Pentagon spokeswoman, said the test was considered a success.

"It did what they expected it to do. Nothing malfunctioned," she said.

The Air Force has not said how such a bomb might be used in combat. John Pike, a defense analyst with GlobalSecurity.org, said Tuesday it might be useful against Iraqi Republic Guard formations or even targets around Baghdad such as one of Saddam's palaces.

Rumsfeld indicated that the big bomb, which was dropped out the back of a C-130 transport plane over a test range at Eglin Air Force Base, Fla., was as much a psychological tool as any weapon.

A Pentagon official who reviewed a videotape of the test said the bomb created a tall cloud of debris that billowed into the sky but did not resemble the mushroom-shaped cloud of a nuclear blast. The Air Force videotape was released later.

Some area residents felt the bomb's detonation but said the explosion was not as big as they had expected.

"It was kind of weak," said Patricia Sariego, a receptionist at the Best Western hotel in Navarre, on the southern edge of Eglin. She said the blast shook doors.

Russia to annex 4 regions of Ukraine this week after "sham referenda"
Thanks for reading CBS NEWS.
Create your free account or log in
for more features.
View CBS News In
CBS News App Open
Chrome Safari Continue
Be the first to know
Get browser notifications for breaking news, live events, and exclusive reporting.