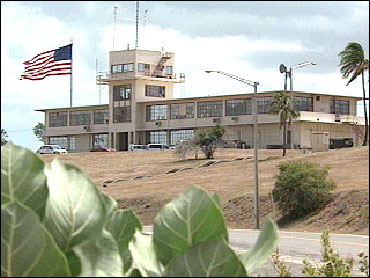 The U.S. military announced Tuesday that it has formed a five-member tribunal to try three terrorism suspects held at this U.S. naval base.

The trials — of an Australian, a Sudanese and a Yemeni — would be the first of any of the prisoners swept up in the U.S. war on terror and held at Guantanamo Bay, Cuba.

The Pentagon's announcement came a day after the Supreme Court issued a ruling that prisoners at the base should have access to U.S. civilian courts to appeal their detention — a decision considered a major blow for President Bush's stance that the United States can jail suspects without judicial review.

"This is an important first step," Air Force Maj. John Smith, a lawyer who helped draft commission rules, said in a telephone interview from the Pentagon. "We'd like to have a case tried by the end of the year."

He said the trials would be held at the U.S. Navy base at Guantanamo, where detainees have been held since January 2002 and now number nearly 600 from 42 countries.

"The announcement isn't directly related to Monday's Supreme Court rulings on the Guantanamo Bay detainees or the enemy combatants, but it is possible, it's even likely, that these sorts of tribunals might satisfy the due process requirements the Justices said they will require," says CBSNews.com Legal Analyst Andrew Cohen.

"I think the government hopes that the tribunal will be a model and that, if it works well, it will be used a lot in the coming years as the government's way of handling terror law suspects in a way that protects national security interests while affording some kind of due process," says Cohen.

A Pentagon statement said the first to be tried will be David Hicks of Australia, Ali Hamza Ahmed Sulayman al-Bahlul of Yemen and Ibrahim Ahmed Mahmoud al-Qosi of Sudan. It was unclear which would go first.

It said the remaining panel members as two U.S. Marine Corps colonels, an Air Force colonel and an Air Force lieutenant colonel, but did not identify them by name.

Al-Qosi is alleged to have been an al Qaeda accountant and bin Laden bodyguard, while al-Bahlul, of Yemen, was labeled a propagandist for bin Laden, according to an official list of charges released by the Pentagon in February.

The men are alleged to have trained at al Qaeda camps in Afghanistan, but the Pentagon's list of charges makes no mention of either man carrying out or planning any terrorist attack.

Hicks, 28, a convert to Islam, is accused of training at al Qaeda camps and taking up arms against U.S.-led forces.

His attorney said Hicks is innocent.

"David Hicks has not violated any law of war and shouldn't have been charged," said Hicks' military lawyer, Maj. Michael Mori. "It's unfortunate these charges will never be tested before a fair and established justice system."

"John Walker Lindh, the so called American Taliban, is serving 20 years in federal prison for conduct similar to that being charged here against Hicks," notes CBS News legal analyst Andrew Cohen. "The difference, of course, is that Lindh is a U.S. citizen and Hicks isn't and as a result Hicks will be entitled to far fewer rights and perhaps a far longer sentence if he is convicted."

The Pentagon said Hicks took an "advanced course in surveillance" while training in Afghanistan, and that he conducted surveillance against the U.S. and British embassies in Kabul.

But Hicks' lawyer said those countries have not had functioning embassies in Afghanistan for many years, so it was not immediately clear if Hicks simply scouted the buildings that formerly served as the embassies.

Former cellmates of Hicks and the other Australian at Guantanamo, Mamdouh Habib, have alleged that both were beaten while in captivity.