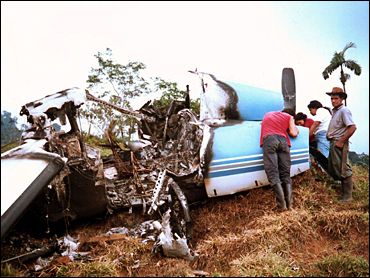 An unspecified number of U.S. troops have been deployed to Colombia to assist a search-and-rescue operation for three Americans whom leftist rebels are holding as "prisoners of war."

Initial reports said the White House had authorized 150 troops to help find the three men, but the administration says some of that number represent previously planned deployments under Plan Colombia, the U.S. initiative to fight narcotics and terrorism in the country.

The three Americans were captured on Feb. 13 after their U.S. government plane went down in rebel territory. A fourth American and a Colombian were shot and killed near the scene of the crash. Colombian authorities announced Monday they had captured a suspect in the killings.

The rebels — the Revolutionary Armed Forces of Colombia or FARC — declared Monday that three men were "prisoners of war" and will be freed only as part of a broad prisoner exchange with Colombian government.

"For them, these gringos just fell out of the heavens," said political analyst Leon Valencia.

FARC demanded a demilitarized zone from the Colombian government in order to exchange the three Americans and dozens of Colombian soldiers and police — who are also held by the rebels — for insurgents who are in Colombian prisons. The rebels posted their statement on their Internet site.

"The three gringo prisoners of war in the custody of our organization will be liberated along with other Colombian prisoners of war once an exchange materializes in an large demilitarized zone," the FARC said in its statement.

In a Monday briefing, State Department spokesman Philip Reeker said the FARC "is responsible for the American crew members' safety, health and well-being."

The U.S. government has not announced what specific mission the Americans were on when their plane went down over southern Colombia's Caqueta state. Officials said they were contractors with the Miami-based Southern Command.

Colombian authorities announced Monday that they had charged Fidel Casallas Bastos with homicide, kidnapping, possessing landmines and rebellion in the kidnappings and shooting deaths.

Bastos was captured near where the plane went down on Feb. 14, officials said. Prosecutors did not say what evidence they had to implicate Bastos.

The United States has been helping Colombia fight production of cocaine and heroin in this South American country. The drug trade is controlled by the rebels and a rival right-wing paramilitary group.

Washington recently expanded its assistance — including the training of Colombian troops by U.S. special forces and millions of dollars worth of helicopters and other gear — to counterinsurgency aid.

The United States has given Colombia about $2 billion, mostly in military aid, since 2001. The 2003 budget recently passed by Congress adds another $500 million.

The mountains and jungles of Caqueta state are a prime cocaine-producing region and a rebel stronghold. During three years of failed peace talks, the rebels controlled a vast demilitarized zone that encompassed part of Caqueta and Meta states. The government ended the peace talks and sent troops back into the region a year ago, but rebels still control much of the area.

The Colombian government had ruled out a prisoner exchange with the rebels, but recently said such a deal might be possible. However, President Alvaro Uribe has said it would never give the rebels another safe haven.

In a statement released Monday, the State Department simply said "a limited number" of troops were involved in the search-and-rescue operation. The Bush administration does not have to inform Congress about troops dispatched to Colombia for search-and-rescue work.

The White House would have to tell Congress if the number of U.S. troops under Plan Colombia exceeded 400, but that is not the case, the State Department said.

According to the most recent White House figures, as of Jan. 13, there were 208 military personnel and 279 contractors on the ground.

The FARC said in its statement that the decision to send more troops to Colombia was "a bald-faced invasion by the United States of our country."

U.S. officials said Monday the additional troops would not be allowed to take on combat roles.

The families of other rebel captives warned relatives of the three captured Americans not to expect such an exchange any time soon.

Lucrecia Torres knows all too well that it may be months, or even years, before the three Americans whose plane went down in rebel territory are freed. Her own son has been held by the same rebel group, the Revolutionary Armed Forces of Colombia, or FARC, for almost six years.

Torres' son was captured by the rebels in May 1997 while serving as a lieutenant in the Colombian Army.

"Be patient," read the last letter Torres received from her son, 10 days before last Christmas. Torres says she learned to wait a long time ago.