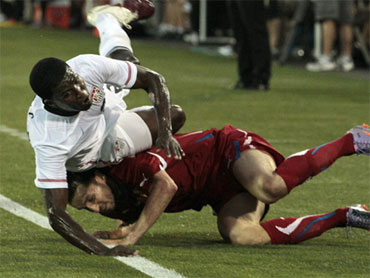 U.S. coach Bob Bradley cut seven players from his preliminary roster Wednesday to reach the 23-man FIFA limit. The Americans will play England on June 12 in their World Cup opener.

Seventeen of the 23 players are based in Europe, with just four from Major League Soccer and two from Mexican clubs. Of the European group, eight play in England, three in Germany, two in Scotland, and one each in Denmark, France, Italy and Norway.

Both Buddle and Gomez are forwards, and Bradley said they "both have been in great form, scored a lot of goals this year."

Buddle was a nonenity for the U.S. during World Cup qualifying. But he's scored nine times this season for the Los Angeles Galaxy to lead the MLS, and he made his first start for the national team in Tuesday night's 4-2 loss to the Czech Republic.

The 29-year-old Buddle didn't quite believe it when Bradley congratulated him at 2 a.m. Wednesday.

"I thought he was messing around. I didn't know. It was too late," he said.

Gomez might have faced even longer odds to make the squad after his contract was not renewed last year by Kansas City in MLS. But he went to Puebla of the Mexican league and tied for the scoring lead with 10 goals in 14 appearances.

"I wasn't good enough for the Wizards last year, so to be where I am today is amazing," Gomez said.

Bradley praised Buddle, Gomez and Beasley for taking advantage of their opportunities.

"One player that I felt fits into that category is Herculez Gomez," Bradley said. "He's worked hard to get to this point.

"DaMarcus obviously had fallen out of it a bit and he needed to make a renewed commitment to the team and doing things as a player that makes his team better. And we've seen that.

"When you make tough decision you try to factor in everything," Bradley added. "You take into account where they are in their season and certainly to this point Edson is one of the best players in MLS. That type of form needed to really count."

A total of 92 players made at least one appearance under Bradley during the four-year World Cup cycle as the team went 35-19-6. He used 43 players during qualifying; 19 of them made the final roster. Those players accounted for 29 of 42 goals scored in qualifying, including Altidore's team-leading six goals.