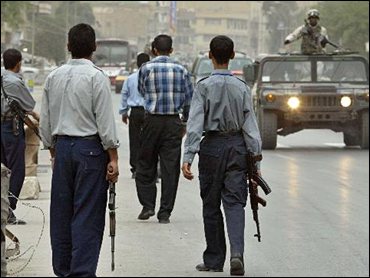 Two American soldiers were killed when their Abrams battle tank was damaged by resistance fighters, and seven Ukrainian troops were wounded in the first ambush of a multinational unit in the Polish sector south of Baghdad, coalition officials said Wednesday.

The tank was disabled when it was struck by a land mine or a roadside bomb Tuesday night during a patrol near Balad, 45 miles north of Baghdad, said Maj. Josslyn Aberle, a spokeswoman for the 4th Infantry Division. A third crewman was evacuated to a U.S. hospital in Germany, she said.

It was believed to be the first M1 Abrams main battle tank destroyed since the end of major combat May 1. During the active combat phase, several of the 68-ton vehicles — the mainstay of the U.S. Army's armored forces — were disabled in combat.

The latest attacks, including a nighttime mortar barrage in Baghdad, followed a day of violence in which insurgents targeted American forces and Iraqis who work with the occupation authorities. U.S. officials also announced that Baghdad's Deputy Mayor Faris Abdul Razzaq al-Assam was killed Sunday in a drive-by shooting.