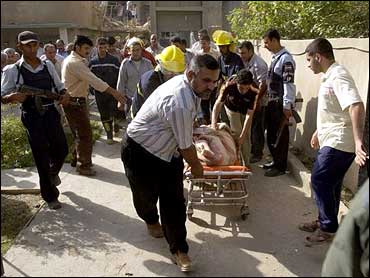 Secretary of Defense Donald Rumsfeld acknowledged Sunday that U.S. officials have met with insurgents in Iraq, after a British newspaper reported that two such meetings took place recently at a villa north of Baghdad.

Insurgent commanders "apparently came face to face" with four American officials during meetings on June 3 and June 13 at a villa near Balad, about 25 miles north of Baghdad, The Sunday Times reported.

When asked on NBC's "Meet the Press" about the report of the two meetings, Rumsfeld said: "Oh, I would doubt it. I think there have probably been many more than that."

Under pressure to show progress on Iraq, President Bush appears to be softening his once-firm line against dealing directly with insurgents - now willing to engage something besides military force, CBS News Correspondent Joie Chen reports.

Rumsfeld insisted the talks with insurgents did not involve negotiations with Iraq's most-wanted terrorist, Jordanian-born Abu Musab al-Zarqawi, but were rather facilitating efforts by the Shiite-led government to reach out to minority Sunni Arabs, who are believed to be the driving force behind the insurgency.

There's no sea change in thinking here, but the latest reports signal that the White House may be coming to grips with an uncomfortable reality: that to make progress in Iraq, they have to deal with the militants, Chen reports.

The Sunday Times report, which quoted unidentified Iraqis whose groups were purportedly involved in the meetings, said the insurgents at the first meeting included the Ansar al-Sunnah Army, which claimed responsibility for suicide bombings in Iraq and a Christmas attack that killed 22 people in the dining hall of a U.S. base at Mosul.

The group rejected the report, denying in an Internet statement meeting with any "crusader or renegade," and that jihad, "holy war," was the only way to retrieve the "grace and dignity" of the Muslim nation.

Two others named were Mohammed's Army and the Islamic Army in Iraq, which in August reportedly killed Italian journalist Enzo Baldoni, the newspaper said.

One American at the talks introduced himself as a Pentagon representative and declared himself ready to "find ways of stopping the bloodshed on both sides and to listen to demands and grievances," The Sunday Times said.

The official indicated that the results of the talks would be relayed to his superiors in Washington, the newspaper said.

Rumsfeld did not provide details about any meetings, saying the insurgency had many layers, ranging from disaffected Sunni members of Saddam Hussein's ousted regime to foreign-born terrorists.

"There's no one negotiating with Zarqawi or the people that are out chopping people's heads off," he said.

"I would not make a big deal out of it. Meetings go on frequently with people," Rumsfeld told Fox News Channel.

The U.S. officials tried to gather information about the structure, leadership and operations of the insurgent groups, which irritated some members, who had been told the talks would consider their main demand, a timetable for the withdrawal of U.S. forces from Iraq, the newspaper said.

During the June 13 talks, the U.S. officials demanded that two other insurgent groups, the 1920 Revolution and the Majhadeen Shoura Council, cut ties with al-Zarqawi's group, al Qaeda in Iraq, according to the report.

A senior U.S. official said earlier this month that American authorities have negotiated with key Sunni leaders, who are in turn talking with insurgents and trying to persuade them to lay down their arms. The official, who did not give his name so as not to undercut the new government's authority, did not name the Sunni leaders engaged in dialogue.