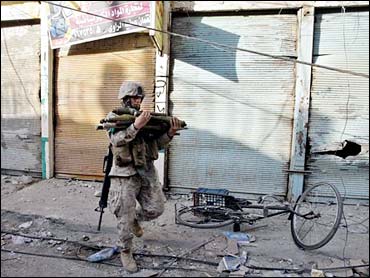 In Fallujah, Marines found the mutilated body of a Western woman as they searched for militants still holding out in the former Sunni insurgent stronghold. The woman could not be immediately identified, but a British aide worker and a Pole are the only Western women known to have been taken hostage.

Marines reopened the Fallujah bridge where Iraqis strung up the charred bodies of two American contractors in March, with officers calling the span's clearing for traffic a symbolic victory in the fight against Iraq's insurgents.

At least 38 American troops and six Iraqi soldiers have been killed in the fighting in Fallujah. U.S. officials estimated more than 1,200 insurgents were killed in the week-long fighting. The number of U.S. troops wounded is now 275, though more than 60 have returned to duty.

U.S. officials said American forces are now throughout the city although it could take several more days of fighting before the city is secured.

"The perception of Fallujah being a safe haven for terrorists, that perception and the reality of it will be completely wiped off before the conclusion of this operation," said Lt. Gen. John Sattler, commander of the 1st Marine Expeditionary Force.

Although fighting in Fallujah was ebbing, insurgent attacks appeared to escalate elsewhere in Sunni Muslim areas of central and northern Iraq.

Heavy explosions rattled central Baghdad near the Palestine and Sheraton hotels after nightfall Sunday, followed by bursts of sporadic gunfire. The U.S. military said initial reports indicated rockets or mortars had struck the area, killing two Iraqis and wounding another.

About an hour later, about four more large explosions rocked the Green Zone, headquarters of the U.S. and Iraqi leadership. At least one private security guard was killed.

Clashes were also reported on Haifa Street, a center of insurgent support in the heart of the capital.

In Mosul, where an uprising broke out last week in support of the Fallujah defenders, militants raided two police stations, killing at least six Iraqi National Guards and wounding three others. One insurgent was killed and three others were wounded before Iraqi security forces regained control of both stations, witnesses said.

Insurgents also set fire to the governor's house, destroying it and damaging his car in northern Mosul. Governor Duraid Kashmoula also said the curfew will continue to be imposed on the city from 4:00 p.m. to 6:00 am in the morning.

A gunbattle erupted Sunday between militants and U.S. troops in the main market in the northern town of Beiji, killing at least six people and wounding 20 others, according to witnesses.

The clash followed an attack in Beiji against American soldiers, who responded with tank rounds and Hellfire missiles, the U.S. military said.

A dozen explosions rocked an American base in the western part of Ramadi, about 30 miles west of Fallujah, after insurgents fired missiles. Witnesses reported seeing flames and smoke billowing from the base.

One U.S. soldier was injured when a suicide bomber blew up his car near a U.S. convoy traveling between Balad and Tikrit, the military said. A Bradley fighting vehicle was damaged by a roadside bomb in Baghdad, injuring one soldier, the military said.

One American Marine and an Iraqi soldier were hurt when five mortar shells struck a checkpoint outside Fallujah.

In an interview with Iraqi television Sunday, interim Prime Minister Allawi defended his decision to order the attack on Fallujah, saying he decided to strike after security forces arrested "two very important" terrorist organizations. He did not elaborate.

Allawi said up to 400 insurgents have been captured, including fighters from Syria, Saudi Arabia, Afghanistan and Morocco but he gave no figures.

Despite the ongoing violence, Allawi ordered Baghdad International Airport to reopen Sunday and opened all but one border crossing with Syria. They were closed under a state of emergency announced Nov. 7 on the eve of the Fallujah attack.

In Fallujah on Sunday, Marines and Army units were still battling small bands of militants scattered in buildings and bunkers across the Sunni Muslim stronghold. Behind them, Iraqi troops were painstakingly clearing weapons and fighters from every room of Fallujah's estimated 50,000 buildings.

ABC pool video footage showed Marines continuing to search door-to-door, blowing the gates off houses with explosives. A bit of bright color stood out on one of the city's ubiquitous gray, rubble-strewn streets — a pink dress on the body of a small child crumpled next to the curb.

Sunni Muslim militants have cut a swath of terror across the country with a string of recent high-profile kidnappings.

The disemboweled body of the woman was wrapped in a blood-soaked blanket on a street in Fallujah, Marines said. Margaret Hassan, 59, director of CARE international in Iraq, and Teresa Borcz Khalifa, 54, a Polish-born longtime resident of Iraq, were abducted last month but the body could not be identified without further tests.

U.S. troops from Task Force 2-2 of the 1st Infantry Division discovered an immense series of underground bunkers linked by tunnels that insurgents stocked with medical supplies, a CNN correspondent embedded with the unit reported. Warplanes dropped four 2,000-pound bombs on the bunker network.

French Prime Minister Jean-Pierre Raffarin said two French journalists held hostage for nearly three months in Iraq were believed to be in a "fairly safe" part of the country. The government has said Christian Chesnot, 37, and Georges Malbrunot, 41 were believed to be alive but authorities lost direct contact with the kidnappers.

Italian troops will not remain in Iraq if the new government elected in January can handle the fight against terrorism on its own, Italian Defense Minister Antonio Martino said. Italy has 3,000 troops in Iraq.

CBS News Correspondent Elizabeth Palmer, who is in Fallujah, says masked men in a video claiming to represent al-Zarqawi vowed Saturday to take the fight to all the corners of Iraq.