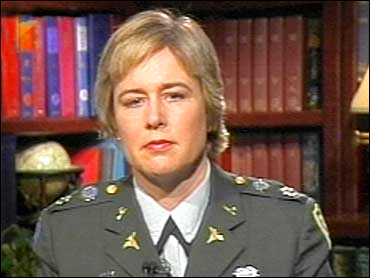 If anything, war can be stressful — especially when lives are on the line.

A soldier's mental state can be tested on the battlefield because they are surrounded by thoughts of attack by weapons of mass destructions, they are worried about families at home and they may see comrades killed.

Lt. Col. E.C. Ritchie, a representative from the Office of Asst. Defense Sec. for Health Affairs, explained on The Early Show that the Department of Defense has considered all these scenarios and trained the men and women of the Armed Services to handle the stressful situations.

Soldiers develop psychological reactions to combat, so it must be dealt with in its early stages to prevent symptoms from becoming severe, according to Ritchie.

So, the military treats battlefield stress with the expectation that soldiers will get better and go back to active duty quickly. She also says most soldiers need "three hots and a cot," or three hot meals and some sleep to fight battlefield stress.

In general, soldiers do emotionally better if they return to their unit after some rest because they don't have the stigma of being a "coward or failure," says Ritchie. Historically, the ones that went back to duty went on to do well, while those who shipped out kept their symptoms for the longer term.

No one person can fight battlefield stress alone. Soldiers will need help to keep sane in times of war. That said, Ritchie says each service has their own version of a stress-control unit, and they're made up of a variety of people with different backgrounds, education and rank. This allows the soldiers in the field to be comfortable to confide their feelings, and it is easier for them to talk to someone at their level.

An Army unit may also have a mix of psychiatrists, psychologists, enlisted technicians with stress training, occupational therapists and psychological nurses, who work closely with chaplains.

And, Ritchie says most of the on-the-ground monitoring is done with no records taken because it reduces any stigma that can occur from psychological review.

In addition, the military has stress inoculation that prepares soldiers for the pressure of the scenarios they will deal with once they're on a battlefield. The military encourages soldiers trained in mental health to provide information to commanders to help units deal with the ugliness of war.

A study done by the Defense Secretary for Health Affairs found the type of stress problems that can develop from time on the battlefield are: family stress, combat stress, acute stress disorder, depression and Post-traumatic stress disorder. Ritchie says most people recover from PTSD, but, for some reason, it becomes chronic and requires treatment.

Post-traumatic stress disorder is a concern when it comes to the psychological wounds being inflicted on the field, but there are a variety of other symptoms that can arise and sometimes we focus too much on PTSD, says Ritchie. Soldiers can also suffer from depression and difficulty integrating with their family. And after the Sept. 11 attack on the Pentagon, the Department of Defense says they have developed a concerted approach to reach out and educate those on stress to prevent things anxiety and suicide.

Once soldiers return home, Ritiche says, there is a wide range of mental health options available to them. First, the military try to prepare soldiers for the return to their families (called re-deployment briefings). Then the Armed Forces promotes family support centers.

She says there are mental health facilities available to all returning soldiers, if they seek them out.