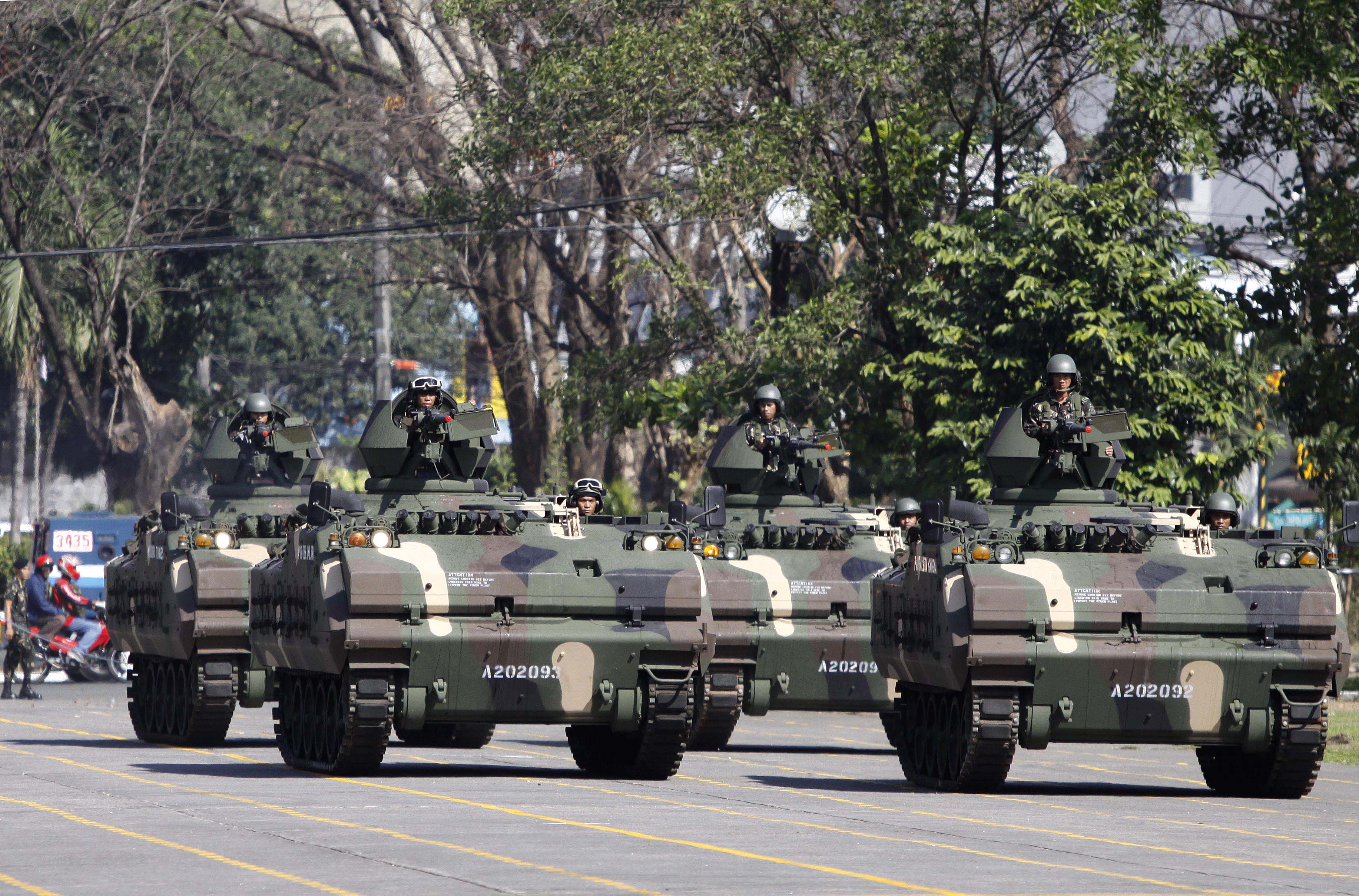 WASHINGTON - In the months before Libyans revolted and President Barack Obama told leader Muammar Qaddafi to go, the U.S. government was moving to do business with his regime on an increasing scale by quietly approving a $77 million dollar deal to deliver at least 50 refurbished armored troop carriers to the dictator's military.

Congress balked, concerned the deal would improve Libyan army mobility and questioning the Obama administration's support for the agreement, which would have benefited British defense firm BAE. The congressional concerns effectively stalled the deal until the turmoil in the country scuttled the sale. Earlier last week, after all military exports to the Qaddafi regime were suspended, the State Department's Directorate of Defense Trade Controls informed Congress that the deal had been returned without action — effectively off the table, according to U.S. officials who spoke on condition of anonymity to describe the deal's sensitive details.

State spokesman Mark C. Toner said the proposed license was suspended along with the rest of "what limited defense trade we had with Libya."

The Qaddafi regime's desire to upgrade its troop carriers was so intense that a Libyan official told U.S. diplomats in Tripoli in 2009 that the dictator's sons, Khamis and Saif, both were demanding swift action. Khamis, a commander whose army brigade reportedly attacked the opposition-held town of Zawiya with armored units and pickup trucks, expressed a "personal interest" in modernizing the armored transports, according to a December 2009 diplomatic message disclosed by the WikiLeaks organization.

The administration's own interest in the deal amounted to a first cautious step toward allowing a major arms purchase by Qaddafi's regime even as U.S. officials waved off other Libyan approaches for weapons systems and military aid.

Toner said senior diplomats had repeatedly warned the Qaddafi regime that "we would not discuss the possibility of lethal U.S. arms sales until Libya made significant progress on human rights issues, visas and other areas of bilateral relationship."

The old M113 troop transports are typically outfitted with a single machine gun. U.S. officials said the now-scuttled deal would not have added new cannons or other guns because of strict rules that all defense sales to Libya had to be "non-lethal" defense products.

But despite the "non-lethal" restrictions, some defense industry experts said the proposal should have never gotten off the ground.

"This deal should have been a red flag," said William D. Hartung, director of the Arms and Security Initiative at the New America Foundation, a non-partisan Washington think tank. "Anything that makes troop transports more useable allows them to be applied to offensive purposes, even if you don't add guns."

On the whole, U.S. defense shipments to Libya under the Obama and Bush administrations have been tightly screened in recent years. U.S. sales were dwarfed by a tide of arms sold by European allies. European Union nations approved sales of $470 million in weapons to Qaddafi's military in 2009 alone — a rush of Italian military aircraft, Maltese small arms and British munitions, according to a January EU arms control report.

By comparison, the U.S. peak was $46 million in approved defense sales in the final year of the Bush administration in 2008 — up from $5 million in Libyan defense sales the year before. The $46 million included $1 million in explosives and incendiary agents, and Toner said the State Department approved shipments of blasting cartridges used in oil exploration. Other U.S. officials cited concerns that such explosive agents could be converted to crude battlefield munitions.

Bush-era officials said the slight increase in Libya defense sales was worth it in return for the dismantling of the rogue nation's atomic weapons program. "We were careful and measured in what we allowed Qaddafi to get," said former ambassador Robert Joseph, who coordinated the 2003 nuclear agreement.

The Obama administration has lagged in providing figures for its recent defense sales, prompting pressure for more specifics from Congress as well as a request late last month for more details on Libyan licenses. One official familiar with defense issues said total military sales to Libya in the Obama administration's first year in 2009 dropped to $17 million — but would have ballooned in 2010 had the $77 million armored car deal gone through.

Instead, the transaction ran headlong into congressional worries about the Qaddafi regime's plans for the armored vehicles. The concerns came from both the Senate and House of Representatives foreign relations committees, officials said.

"Congress doesn't usually step in to stop these deals, so they clearly must have had serious reservations that the administration didn't share," said William Lowell, a veteran defense industry consultant who headed the State Department's defense trade agency in the 1990s.

Libyan military officials long clamored to upgrade their old M113 transports. Despite a 1978 U.S. ban on weapons sales, Libya apparently obtained its fleet of U.S-built, Vietnam-era transports around 1980, according to a defense industry official familiar with the deal.

In 2007, Libyan army generals told a visiting American delegation they wanted upgraded troop carriers as well as Chinook helicopters to speed their military's transport, said a senior U.S. official familiar with the request. European subsidiaries of major American defense firms were soon shuttling into Tripoli. General Dynamics and Northrop Grumman were among companies listed as attending the 2008 and 2010 Libya Defense and Security Exhibition in Tripoli.

Momentum began bubbling for the troop transport deal in 2009 after a U.S. military attache in Tripoli told BAE officials about Libyan interest, the defense industry official said. BAE had paired up with a Turkish firm, NUROL Holding, in a joint venture to modernize old M113s for other Mideast and Asian armies. The joint firm, FNSS Defense Systems, submitted the $77 million Libyan proposal in September 2009 to the State Department's defense trade agency, officials said.

Libyan officials wheedled for swift action. In a meeting with American diplomats in Tripoli in late 2009, a senior aide to Qaddafi's son Saif said that he and his brother Khamis wanted the U.S. to quickly approve the armored transport upgrades. The aide "requested an update on the status" of the joint venture, Ambassador Gene Cretz wrote on Dec. 14, 2009, in the cable published by WikiLeaks.

The Libyans' obsession with troop transport also showed in their interest in Jordanian-built "Tiger" high-mobility vehicles and in MH-6 "Little Bird" helicopters previously denied by U.S. officials. Both items could not be sold to Libya, U.S. officials repeated, according to the memo.

The armored transport deal, though, sailed through. By late 2009, it was green-lighted by the State Department's trade office, officials said. Under rules governing defense trade, the deal still required congressional oversight before it could be clinched — because of the high cost involved and the fact that troop carriers were deemed major military equipment.

But the deal soon bogged down in doubts. Officials noted that documents cited differing numbers of troop transports, ranging from 40 to 60 — raising alarm that the Libyans might be padding the figures to obtain additional parts. The committees also pressed the State Department for a clearer sense of how the Libyans would use the armored carriers, but complained they did not get definitive answers.

There were also concerns about BAE's role. After months of negotiations with the Justice Department, the parent firm of the British-owned defense giant pleaded guilty in March 2010 to conspiracy and false statements charges, agreeing to pay a $400 million fine in a case involving questionable payments to a Saudi official and offshore shell companies.

The State Department then placed a "temporary administrative hold" on weapons export licenses sought by both BAE's British and U.S. entities. The department also said it was considering debarring BAE, a move that would limit the company's ability to export items with U.S.-made content.

The State Department has not debarred the defense firm, but BAE's involvement added to uncertainty about the deal, officials said. "I'm a little surprised the right hand at State didn't coordinate with what the left hand at Justice was doing," said William Reinsch, president of the National Foreign Trade Council and a former senior Commerce Department official.

In a statement, BAE said that "responsible and ethical business conduct is fundamental to the success of our company and is evident in every aspect of our business, including in our participation in the Foreign Military Sales Program and our compliance with defense export control laws."

By summer 2010, the deal was effectively scuttled, stalled by too many doubts.