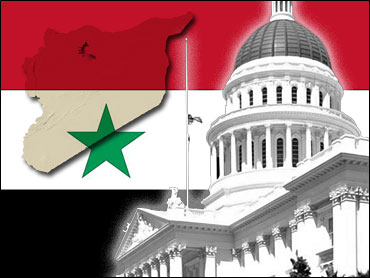 The sanctions, which the White House will impose as early as Tuesday, are being ordered because the administration believes Syria has aggravated tensions in the Middle East by supporting militant groups.

He would not say when the sanctions would be announced.

Syrian Foreign Minister Farouk al-Sharaa spoke of a "unanimous Arab decision" to condemn the sanctions, which would be reflected in a final resolution from a meeting of the Arab League foreign ministers under way in Cairo, Egypt. Al-Sharaa said U.S. allegations that his country is not cooperating in the fight against terror are unfounded since his country has agreed with other Arab countries on the need to combat terrorists.

The United States is ordering the sanctions "because they will not fight terror and they won't join us in fighting terror," Bush said in an interview last week with the Cairo-based newspaper Al-Ahram International.

"We've asked them to do some things and they haven't responded," Bush said. "And Congress passed a law saying that if Syria will not join - for example, booting out a Hezbollah office out of Damascus - that the president has the right to put sanctions on."

Bush signed the Syria Accountability Act in December, one month after Congress overwhelmingly approved it. It bars U.S. exports to Syria of dual-use items that could have military applications. It also requires Bush to choose at least two of six possible economic or diplomatic sanctions.

Congressional sources, speaking on condition of anonymity, said they have been told the administration plans to choose three sanctions. One would bar Syrian planes from flying over or landing in the United States. Another would prohibit new investments by U.S. oil companies in Syria. It was not clear whether other U.S. business operations in Syria would also be prohibited. Bilateral trade with Syria is about $300 million a year.

One source said the third penalty would be a ban on U.S. exports to Syria, other than food and medicine.

Syria provided the United States with intelligence on al Qaeda after the Sept. 1, 2001, attacks. Though some U.S. officials have played down the importance of that, the cooperation probably discouraged the administration from imposing sanctions that would have reduced diplomatic contacts.

Syria has been on the State Department's list of terror-sponsoring nations for its support of groups like Hamas and Hezbollah that attack Israel. U.S. officials have also said that Syria hasn't done enough to prevent anti-American fighters and arms from crossing its border with Iraq. They have also criticized its domination of Lebanon, where it has based thousands of soldiers.