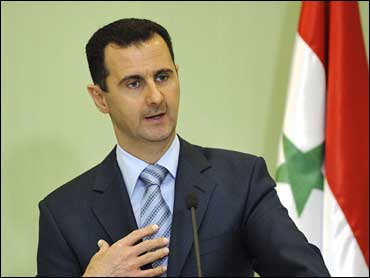 A top adviser to U.S. Middle East envoy George Mitchell wrapped up an undisclosed round of talks with Syrian officials aimed at giving momentum to the stumbling peace process, a U.S. source revealed on Friday.

An embassy official in the Damascus said Frederic C. Hof, a conflict resolution expert, met Thursday with Syrian Foreign Minister Waleed Mouallem as part of the U.S. strategy to bring peace to the region.

"Mr. Hof highlighted the United States' pursuit to work for achieving comprehensive peace in the region and resuming peace negotiations on all tracks," one source told CBS News in a telephone conversation. The source refused to get into specifics.

There was no word from the Syrian government on the visit, seen by many diplomats as yet another distinct sign the Obama administration was determined to bring Israel and its Arab neighbors back to the negotiating table.

Syria remains a vital player in the Middle East. Damascus wields significant influence over events in Lebanon; it is a close ally of Iran (whose disputed nuclear program is a matter of international concern); it shares a crucial border with Iraq; and it has a direct relationship with Palestinian extremist groups.

Hof was last in Damascus in July. His new visit comes only a few days after a confirmation hearing in the Senate to discuss why the U.S. needs to send an ambassador to Damascus for the first time in five years.

Robert Ford, Obama's nominee for the post said on Tuesday that the U.S. needs to deliver "straight talk" to the Syrian leadership on stabilizing Iraq and cutting links to Hezbollah in Lebanon.

Mitchell, the former Senate Democratic leader who is the spearheading U.S. peacemaking efforts in the Mideast, was set to visit Israel and the Palestinian territories last weekend, in bids to kick-start peace talks with the Palestinians.

But he cancelled his plans due to the recent spat between Israel and Washington over continued Israeli construction in east Jerusalem, announced as Washington was pushing a plan to restart peace talks between Israel and the Palestinians -- an ambitious plan which foresaw a final deal within two years and agreement on permanent borders in just nine months.

Under the U.S. plan, the Israelis and Palestinians would immediately resume final status talks that were suspended during the Gaza war a year ago.

Syria accused Israel of being an "untrue partner" in the peacemaking process. Syrian President Bashar Al-Assad told a joint press conference with his Italian counterpart Giorgio Napolitano in Damascus on Thursday that Israel was not seeking peace.

Turkey brokered four rounds of indirect talks between Syria and Israel in 2008 -- the first such contacts since previous peace negotiations were broken off in 2000 over the fate of the Israeli-occupied land in the Golan Heights, along Syria's border.

Syria has insisted that the promise of an Israeli withdrawal from the Golan Heights be a precursor to any renewed peace negotiations between the two countries. Israeli Prime Minister Benjamin Netanyahu has vehemently rejected the notion of a withdrawal.

Ties between Washington and Damascus became strained after the U.S.-led invasion of Iraq in 2003 and the assassination of Lebanese leader Rafiq Hariri in 2005, which was widely blamed on Syria. Damascus denies any involvement.

Since being sworn, Mr. Obama has cautiously sought to improve ties with Syria. Congressional visitors have made a flurry of trips to the country. U.S. Under-Secretary of State for Political Affairs William J. Burns was in Damascus end of last month and met with President Al-Assad.

Acting Assistant Secretary of State for Near East Affairs Jeffrey Feltman and Daniel Shapiro, a senior staffer on the National Security Council, were also believed to fly in the Syrian capital in April.