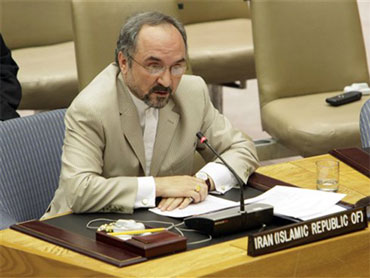 In announcing the move, Treasury Secretary Timothy Geithner said the new U.S. penalties were aimed at those helping Iran develop its nuclear and missile programs and evade international sanctions.

The administration's announcement is the first step in implementing an Iran sanctions resolution passed by the U.N. Security Council last week.

"In the coming weeks we will continue to increase the financial pressure on Iran," Geithner said.

Geithner told a White House news conference that the administration expects other countries to announce new penalties of their own against Iran soon.

"This is not something the United States can do alone," he said.

This has come as a response to Iran stepping up its nuclear defiance Wednesday by endorsing plans to boost its uranium enrichment and to build four new facilities for atomic medical research - less than a week after the latest U.N. sanctions.

The additions to the U.S. sanctions list include Iran's Post Bank for its support of nuclear proliferation, officials said. That brings to 16 the number of Iranian-owned banks on the U.S. list.

Among the other new targets of U.S. sanctions are five front companies and a list of more than 90 names of ships that Iran's national maritime carrier has been using to try to evade sanctions, the Treasury Department's Stuart Levey told the same White House briefing.

Levey, Treasury's lead architect of U.S. sanctions on Iran, said the U.S. also is adding two individuals and four organizations that are part of Iran's Revolutionary Guard, which the U.S. claims plays a key role in Iran's missile programs and support for terrorism.

The U.S. also added to its sanctions list 22 petroleum, energy and insurance companies located inside and outside Iran that are owned or controlled by the Iranian government, Levey said.

"We will continue to target Iran's support for terrorist organizations," Geithner said.

The series of announcements and sharp comments by President Mahmoud Ahmadinejad - who said the West must come to Iran like a "polite child" in any possible nuclear talks - could encourage calls for more economic pressure against the Islamic Republic.

Ahmadinejad said he will soon announce new conditions for talks with the West. But first, he wants to punish world powers for imposing sanctions on Tehran and added Iran will not make "one iota of concessions."

"You showed bad temper, reneged on your promise and again resorted to devilish manners," he said of the powers that imposed sanctions. "We set conditions (for talks) so that, God willing, you'll be punished a bit and sit at the negotiating table like a polite child," he told a crowd during a visit to the central Iranian town of Shahr-e-Kord. His speech was broadcast live on state TV.

The West and other nations are increasingly worried Iran will eventually develop the capacity for nuclear weapons. Iran insists its nuclear program is only for peaceful energy production and research.

Iran's parliament speaker Ali Larijani said lawmakers back the government's push to enrich uranium at a higher level since earlier this year as a response to "bullying countries."

Iran currently enriches uranium up to 20 percent levels - which is far short the 95 percent plus enriched uranium needed for an atomic weapon, but is a significant advancement from the low-grade uranium at nearly 5 percent level from the early stages of making reactor-ready fuel.