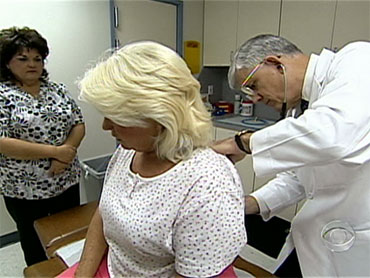 The United States ranks near the bottom in life expectancy among wealthy nations despite spending more than double per person on health care than the industrialized world's average, an economic group said Tuesday.

Life expectancy at birth in the U.S. was 78.1 years in 2007, according to the Organization for Economic Cooperation and Development.

That's a year less than the OECD average of 79.1, and puts the U.S. just ahead of the Czech Republic, Poland and Mexico, where spending on health care is many times less per person, the Paris-based organization said in its latest survey of health trends among its 30 rich member countries.

Total U.S. spending on health care was $7,290 a person in 2007, nearly two-and-a-half times the OECD average of $2,984. The figures include spending by both individuals and governments.

"It suggests that the U.S. is not getting great value for its health spending, in terms of life expectancy," Gaetan Lafortune, one of the report's co-authors said.

He said the U.S. needs to look "closely at spending that has little or no value in terms of improved health."

"Life expectancy is only partly driven by how a country's health care system performs," Lafortune said.

Outside factors such as the country's higher rates of obesity and violent death, as well as mishandling of chronic conditions leading to avoidable hospital stays, play a bigger role in life expectancy rates than health care spending, Lafortune said.

Spending on health care in the U.S. grew more quickly between 1997 and 2007 than in France, Italy, Germany and Spain, averaging 3.4 percent annually over the period. The U.S. growth rate was still below the OECD average of 4.1 percent.

The U.S. far outspent the next biggest health care spenders, Norway and Switzerland, despite the fact that those countries' life expectancies are two to four years longer, according to the report.

The report notes that, in addition to the U.S., Denmark and Hungary also have lower life expectancies than would be predicted by their relative wealth and levels of health care spending.

On the other hand, the Japanese and the Spanish live longer on average than their national income and their health care spending would predict.

The U.S. also underperforms other rich countries in the health of its youngest.

The report noted that research suggests many factors beyond the quality of a country's health system, such as income inequality and individual lifestyles and attitudes, influence infant mortality rates.

Per capita spending on pharmaceuticals rose by almost 50 percent over the last 10 years in OECD countries, reaching a total of $650 billion in 2007. The U.S. was the world's biggest spender on pharmaceuticals, spending $878 per person, with Canada next at $691 per person and the OECD average at $461.

The report was released as the U.S. Senate is considering a health care overhaul promised by President Barack Obama during his presidential campaign.