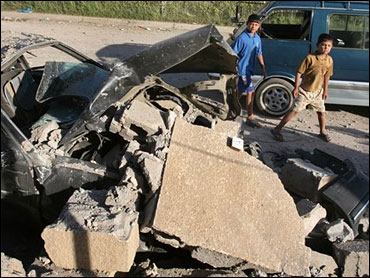 At least 30 deaths have been reported across Iraq on Tuesday as the prime minister promised to crack down on escalating sectarian violence.

A U.S. soldier was killed in Baghdad when a bomb struck the convoy he was riding in, the U.S. Command said

A car bomb exploded outside a Shiite funeral in Baghdad, killing at least four people and wounding 20. Gunmen also killed one student, injured another and kidnapped three more at Baghdad University's business school.

Meanwhile, Iraq's prime minister promised to release 2,500 prisoners and to press ahead with a security plan aimed at ending rampant sectarian and militia violence as he sought to quell public anger over a series of brazen attacks.

His comments followed the daytime abductions of 50 people in downtown Baghdad by gunmen wearing police uniforms and the shooting deaths of 21 Shiites north of the capital, including students who were pulled from their minivans.

Prime Minister Nouri al-Maliki blamed insurgents trying to derail the political process for the spike in violence since he took office more than two weeks ago.

They "have increased their bloody operations to derail and bring down the national unity government, but, God willing, they will lose," he said at a news conference.

In the southern city of Basra, masked gunmen attacked relatives of a slain Sunni merchant when they went to the morgue to collect his body. Five were killed and six wounded.

Police also found nine severed heads in fruit boxes northeast of Baghdad. It was the second such grisly discovery in the volatile area in less than a week.

The Iraqi Health Ministry says Baghdad's main morgue has received 6,000 bodies during the first five months of this year. Most had died violently.

Al-Maliki also said his government was asking the U.S. military about two incidents that involved the killing of civilians — a Nov. 19 alleged massacre at Haditha and the deaths of about a dozen people in the town of Ishaqi on March 15.

"We are still asking about these dossiers," he said. "We are still following it up and we are still waiting for the results of the investigations. We have a committee investigating these painful incidents, we condemned these practices, as they are against human rights."

U.S. authorities are investigating the deaths of two dozen people following a bombing of Marines in Haditha. The military, however, cleared U.S. troops of wrongdoing in the deaths of up to 13 Iraqis in Ishaqi, a village in the Sunni Arab heartland north of Baghdad.

The Iraqi government plans to set up its own committee to investigate the killings, but has not yet done so.

Al-Maliki, who announced a plan last month aimed at restoring order in Baghdad and has pledged to take over security in Iraq from U.S. forces within 18 months, acknowledged the deteriorating security situation in the capital and other areas.

He offered condolences to the families of those killed Sunday, when masked gunmen ordered the passengers off two minivans carrying students north of Baghdad, separated Shiites from Sunni Arabs and killed them.

But he made no mention during the news conference of Monday's raid in which gunmen in police uniforms raided a business district in central Baghdad, randomly seizing 50 people, including travelers, merchants and vendors selling tea and sandwiches. Both Shiites and Sunnis work in the area.

Iraqi Maj. Gen. Abdul Azizi Mohammed Jassim, in charge of Defense Ministry operations, told reporters that two of the captives had been freed but would provide no other details.

The Shiite-dominated Interior Ministry, which oversees the police, denied its forces were behind the kidnappings.

But suspicion fell on militias, which are believed to have infiltrated the police forces and have killed hundreds in sectarian violence, personal vendettas and kidnappings for ransom.

The Iraqi Islamic Party, a major Sunni Arab political party, accused the Interior Ministry of trying to cover up police involvement in the raid and appealed to Shiite and Sunni religious and political leaders to intervene directly to end the violence.

Prominent Sunni politician Adnan al-Dulaimi also called for the government and U.S.-led forces to step up action against such attacks and urged the speedy appointment of interior and defense ministers — key security posts that al-Maliki has been unable to fill because of disagreement among Iraqi's fractured ethnic and religious parties.

"The killing operations have become a phenomenon," al-Dulaimi said. "Fifty Iraqis have been abducted and the Iraqi officials have done nothing to stop those behind these terrorist acts."

"I call on the political blocs to expedite the appointments of the interior and defense ministers," he said. "It might reassure the Iraqi people and end these barbaric acts."

The Bush administration also is eager for the security posts to be filled as it has pinned its hopes on a unity government that will drain support for the Sunni-led insurgency and restore order in Baghdad and elsewhere in the country, enabling U.S.-led forces to go home.

A U.S. soldier was killed Monday in Baghdad when a bomb struck his convoy, the military said.

The military also said it has handed over responsibility of operating patrols in the volatile, Sunni-dominated province of Anbar to an Iraqi army unit.

The 1st Iraqi Army Division officially took control of a military base in between the cities of Ramadi and Fallujah, on Friday from U.S. Army's 1st Battalion, 110th Infantry Regiment.

In an apparent effort to appease Sunni anger over allegations of random detentions and maltreatment of prisoners, al-Maliki said 2,500 Iraqi prisoners will be freed from U.S. and Iraqi-run detention centers to promote "reconciliation and national dialogue."

The first batch of about 500 detainees will be released Wednesday and others will follow after their cases are reviewed by a committee, he said. The Shiite prime minister stressed that loyalists of Saddam Hussein and his Baath Party "and terrorists whose hands are stained with the blood of the Iraqi people" will be excluded.