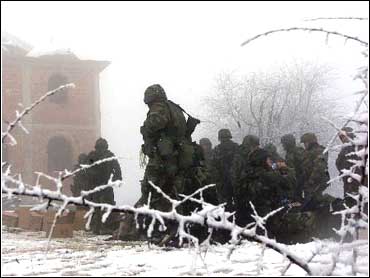 An American peacekeeper has died of a gunshot wound at a U.S. military base in Kosovo, an official said Tuesday.

The body of Pfc. Gary S. Kalinofski, 21, was discovered Monday by fellow soldiers at Camp Magrath, 30 miles east of the province's capital, Pristina.

The cause of Kalinofski's death remained unknown, but did not result from any engagement with hostile forces, said Major James Crews, a spokesman for the U.S peacekeepers in Kosovo.

Authorities were investigating the circumstances surrounding his death, Crews added.

Kalinofski had served in Kosovo since November. He had been assigned to A Company, Task Force 1-32nd Infantry Regiment in Fort Drum, N.Y.

He is survived by his parents, who live in Fayetteville, N.C.

Some 5,000 U.S. soldiers serve as part of the peacekeeping force in Kosovo. In 1999, NATO and the United Nations took control of the southern Yugoslav province after an air campaign that ended former leader's Slobodan Milosevic's crackdown against the ethnic Albanian majority.