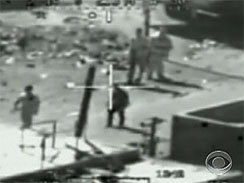 An American soldier suspected of leaking a military video of an attack on unarmed men in Iraq was charged with multiple counts of mishandling and leaking classified data and putting national security at risk, the U.S. Army said in a statement Tuesday.

Army Spc. Bradley Manning is suspected of leaking a classified video that shows a group of men walking down the street before being repeatedly shot by the Apache helicopters. The American gunners can be heard laughing and referring to the men as "dead bastards."

The classified video was taken from the cockpit during a 2007 fire fight and posted last April on the website WikiLeaks.org. It was an unflattering portrait of the war that raised questions about the military's rules of engagement and whether more should be done to prevent civilian casualties.

Among those believed to have been killed in the attack were a Reuters photographer Namir Noor-Eldeen, 22, and his driver Saeed Chmagh, 40. Two children were wounded.

Manning, 22, from Potomac, Md., was detained in Baghdad in early June and is now being held in Kuwait.

A military version of a grand jury hearing will determine if Manning should face a trial by court-martial, the Army's statement said.

A criminal investigation is still open, the statement said, detailing charges against Manning including "transferring classified data onto his personal computer and adding unauthorized software to a classified computer system."

An internal military investigation concluded that the troops in the helicopters acted appropriately. According to a last year's summary of the results of the inquiry, Reuters employees were likely "intermixed among the insurgents" and difficult to distinguish because of their equipment, the document states.

Former computer hacker Adrian Lamo of Sacramento, Calif., said he alerted the military after Manning confided in him online that he had leaked the video in addition to 260,000 classified diplomatic cables.

Lamo, who first provided his account to Wired.com, told The Associated Press last month that he agonized over the decision.

"I turned him in because, for the rest of my life, I'd wonder if something he leaked would have cost a human life," Lamo said.

In 2004, Lamo had pleaded guilty to breaking into The New York Times' computer system and still owes $62,800 in federal restitution. He said he has received no financial benefit from turning in Manning and that the money he owes was never discussed.