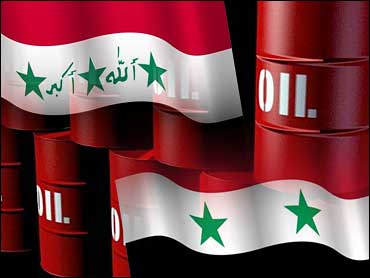 But Rumsfeld said he could not guarantee that the pipeline was completely shut off or that oil was not being clandestinely shipped from Iraq to Syria.

"We do not have perfect knowledge," Rumsfeld said at a Pentagon news conference. "We do know that they were instructed to shut it down and they have told us that they have."

Rumsfeld and Gen. Richard Myers, chairman of the Joint Chiefs of Staff, said coalition forces had not destroyed any pipelines.

"They would not destroy the pipeline or any of the other infrastructure," Myers said.

The pipeline opened in 2000 and was believed to have handled about $1.2 billion worth of oil a year shipped in violation of the United Nations sanctions against Iraq.

Mideast powers, some of them friends of the United States, are taking seriously the possibility of U.S. action against Syria after a barrage of warnings from Washington against sheltering ousted Iraqi leaders or terrorists.

On Tuesday, Secretary of State Colin Powell tried to calm the charged atmosphere, by saying the United States has no plans to go to war with Syria or anyone else to bring democracy to a totalitarian state.

"Iraq was a unique case, where it wasn't just a matter of a dictator being there," Powell said at a news conference with foreign reporters. "There is no war plan to go and attack someone else, either for the purpose of overthrowing their leadership or for the purpose of imposing democratic values."

"Democratic values have to ultimately come from within a society and within a nation," he said, tempering the heated rhetoric from Rumsfeld and some other senior U.S. officials.

Having declared war against terror worldwide, singled out Iraq, Iran and North Korea as an "axis of evil," and then gone to war with Iraq, President Bush has raised fears abroad, particularly in Europe and the Middle East, that the world's only superpower would use its muscle freely against dictatorial regimes.

This week, Saudi Arabia is hosting a meeting of Iraq's neighbors that is expected to discuss U.S. warnings to Syria. And Iran has quickly come to Syria's defense, saying it will employ all nonmilitary means to prevent a U.S. attack on its ally.

In Damascus, few Syrians understand why U.S. President George W. Bush is coming after them. They feel their country has cooperated with him in the war against terrorism post-Sept. 11, and gave Arab cover to U.N. resolution 1441 demanding Saddam disarm or face the consequences.

"They are extremely disappointed," said Maggie Mitchell at the Washington-based Middle East Institute, who recently met with officials in the Syrian capital, Damascus. "They helped in the fight against al Qaeda and they went against Syrian and Arab public opinion to back a resolution that the United States used to go to war against Iraq."

U.S. officials in the past two days have accused Syria of sheltering Iraqi fugitives, possessing chemical weapons and supporting terrorism.

As for Iraq's ousted leaders, some of whom may be seeking haven in Syria, Rumsfeld said they will eventually be captured.

"I think there is no question there are going to be some people who are going to escape from that country. It's got porous borders," Rumsfeld said. "Obviously, the people in Iraq that ran that government are on our list. We'd like to have 'em. ... We'll even get most of them over time."

The Syrians have flatly denied the allegations as misinformation inspired by its archenemy Israel.

"Even the Israelis will pay the price for it in the future if they don't tell their friends in Washington to stop it," Syrian Foreign Minister Farouk al-Sharaa said in Damascus on Saturday.

"They (Americans) shouldn't encourage them," he added. "They are encouraging a very sinister game."

Relations between Syria and the United States have always been uneasy, complicated by Syria's close ties to the Soviet Union during the Cold-war era and its hardline stance on the Mideast peace process.

But despite its outwardly inflexible attitude to the United States, Syria has always been careful to keep the thin diplomatic ties from snapping.

In the 1991 Gulf War, Syria, in typical quiet fashion, sent troops to join the U.S.-led campaign to oust Iraq from Kuwait. It has shed most of the closed, socialist image that characterized it when it was a Soviet ally.

After the Sept. 11 attacks, Syrian President Bashar Assad sent a warm letter of condolences to President Bush, and there was intelligence cooperation on terrorism between their countries. Syria has for years been watching the extremist Muslim groups that it had fought in the 1980s.

In November, Syria stunned the Arab world by voting for U.N. Resolution 1441, a signal that Syria's improving relations with Iraq were purely economic.

One of the problems in Syria is that Assad is surrounded by an old guard who helped bring him to power after the death of his father, Hafez Assad, in June 2000, and for whom any kind of change, especially in the direction of a rapprochement with Washington, is a threat.

Hafez Assad, who took over in a bloodless coup in 1970, ruled Syria with an iron fist. He maintained a vast army of secret police and informers and was accused of jailing thousands of political prisoners without trial.

For the old guard, used to a Cold War definition of the relationship with America, close ties with the United States violate core principles of the ruling Baath party and goes against the image Syria has cultivated for decades as the champion of Arab rights and the leader of the anti-American, disaffected Arab street.

At the same time, members of the old guard are not giving Assad, an eye doctor who came to power with little experience in politics, the chance to introduce limited reforms, especially in the economic and financial sectors, because they worry they would lose long-held privileges.

Now, Syria finds itself squeezed from almost all sides: pressure from Washington, the presence of U.S. troops next door in Iraq, Israel to the south and Turkey, with whom Syria has water problems, in the north. Syrian human rights activists say Damascus' best way out is for Syria to take steps toward democracy.

"The government needs to open up to the people and end its policy of repression and subjugation," said Haitham Maleh, a Syrian lawyer and human rights activist. "We are facing a crisis and authorities must act accordingly."