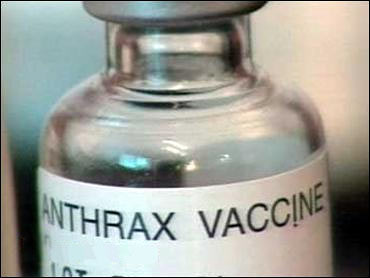 The government has canceled an $877 million contract for a new anthrax vaccine, after the struggling manufacturer missed a key deadline to begin human tests of the shots.

VaxGen Inc.'s "failure to perform is not excusable," said a terse letter the Department of Health and Human Services sent to the California-based company late Tuesday.

The agency concluded the failure put VaxGen in default of the company's federal contract — meaning that for now, the government has no clear plan to find a next-generation anthrax vaccine.

The decision had been expected since November but still was bad news, both for VaxGen and the government.

The VaxGen contract was supposed to be the crown jewel of Project BioShield, a $5.6 billion government program to build national drug stockpiles in case of a bioterror attack — by guaranteeing sales if a company took the risk of developing such a drug.

VaxGen's shots were intended to replace the current anthrax vaccine, which requires six shots administered over 18 months. VaxGen's was to require no more than three shots.

But VaxGen, a company best known for the flop of an experimental AIDS vaccine, had trouble almost from the beginning.

First, it disclosed it would miss by a year the original November 2005 deadline for producing vaccine. Then last fall, the Food and Drug Administration halted plans for human testing, citing concern that the vaccine would lose its potency too quickly to be effective.

VaxGen, of Brisbane, Calif., has the right to appeal and said in a statement that it "is actively exploring its strategic and legal alternatives."