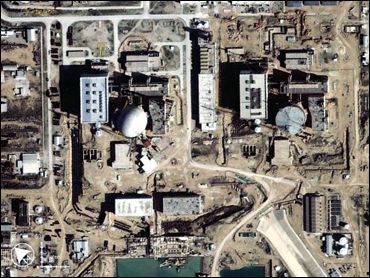 The United States suggested Iran was violating the Nuclear Nonproliferation Treaty on Tuesday and urged other nations at a U.N. atomic energy agency meeting to join in pressing Iran to prove it is not running a covert nuclear weapons program.

Meanwhile, Israel hinted at possible military action to stop what it calls a nightmare scenario — nuclear weapons in the hands of Iran — but for now is waiting for U.S. diplomatic pressure and closer international scrutiny to do the job.

In a closely watched address, chief U.S. delegate Kenneth Brill focused on a report outlining discrepancies between past Iranian statements on the nature of Tehran's nuclear program and findings by the International Atomic Energy Agency.

The report, by IAEA head Mohamed ElBaradei, lists findings of traces of weapons-grade enriched uranium and other evidence that critics say point to a weapons program.

"The United States believes the facts already established would fully justify an immediate finding of noncompliance by Iran," Brill said during a meeting of the agency's board. Still, he said, the Americans were ready to give "Iran a last chance to drop its evasions" before pushing for Security Council involvement.

On Monday, the International Atomic Energy Agency, which is investigating suspicions of a secret Iranian nuclear weapons program, demanded full disclosure from Tehran, including acceptance of snap inspections.

Iran insists its nuclear programs are only for generating electricity as oil supplies dwindle. It also has said its equipment was "contaminated" with enriched uranium by a previous owner.

Suspicions about Iran's nuclear activities prompted ElBaradei in February to tour Iran's nuclear facilities, including the incomplete plant in Natanz, about 300 miles south of Tehran. Diplomats said he was taken aback by the advanced stage of a project using hundreds of centrifuges to enrich uranium.

Another, larger uranium enrichment facility, is to be completed within the next few years, Western intelligence agencies discovered with the help of Iranian opposition groups.

ElBaradei has said that Iran's nuclear program has been going on far longer than the agency had realized and that it's possible Tehran had bought nuclear components on the "black market."

"I would urge Iran in the coming weeks to show proactive and accelerated cooperation, and to demonstrate full transparency by providing the agency with a complete and accurate declaration of all its nuclear activities," he said Monday in Vienna, Austria.

In an apparent victory for Iran, President Bush's administration last week decided not to ask the Vienna meeting to endorse a resolution finding Iran in noncompliance of IAEA obligations — a conclusion that would have brought the matter before the U.N. Security Council.

Iran has suggested it may sign a protocol opening its nuclear programs to full and unfettered inspections by the IAEA. But that depended on the outcome of the meeting of the agency's board of governors, chief Iranian delegate Ali Akbar Salehi said.

"We wish there will be an agreement," Salehi said Tuesday. "We'll wait to see what the outcome is, but we have kept all of our options open."

ElBaradei pressed the Iranians for a complete list of all imported equipment and components they contend were contaminated as well as their countries of origin, the dates they were acquired and where they have been used or stored since.

Brill, in his address, accused Iran of "stalling and stonewalling" on the true aims of its nuclear activities.

"The more the agency has looked underneath the surface of Iran's program, the less the explanations offered have hung together in a plausible way," he said.

Israel estimates Iran is just two to three years from having nuclear weapons.

An Israeli government official said Iran does not yet have the right amount of enriched uranium, as well as some other chemicals, needed to build a nuclear bomb, but it has the "know-how" and the ability to develop the materials. The official spoke on condition of anonymity.

The delivery method — the long-range Shahab-3 missile — was successfully tested in July, and experts said Iran is to begin serial production within two years.

If diplomacy fails, Israel, which is about 600 miles to the west of Iran, has made clear a military operation is feasible.

Israeli security officials said Iran's nuclear program is a focus of the army's five-year strategic plan, and Prime Minister Ariel Sharon has ordered the Mossad spy service to keep a close eye on the developments in Tehran.

In 1981, a fleet of Israeli warplanes destroyed Iraq's nuclear reactors, halting Saddam Hussein's progress in obtaining nuclear weapons. At the time, the operation was internationally condemned, even by Israel's staunchest ally, the United States.

But since Sept. 11, 2001, U.S. troops have overthrown regimes in Afghanistan and Iraq, both on Iran's borders, in less than two years. Tehran is aware that as a member of Mr. Bush's "axis of evil" it could be next in line.

Iran apparently believes an attack could come from the United States or Israel and announced it was increasing its defense spending this year.

Iranian Foreign Ministry spokesman Hamid Reza Asefi recently warned Israel against embarking on an "adventure" similar to the 1981 strike, saying "it will pay dearly" if it does so.

Israel has never confirmed being a nuclear power, but it is widely believed to have nuclear weapons.

The United States and Israel would most likely choose to carry out pinpoint strikes on Iranian nuclear facilities, rather than a large-scale assault if forced to take military measures, said Ephraim Kam, a researcher with Tel Aviv University's Jaffee Center for Strategic Studies. Kam released a study last week on Iran's nuclear capabilities.