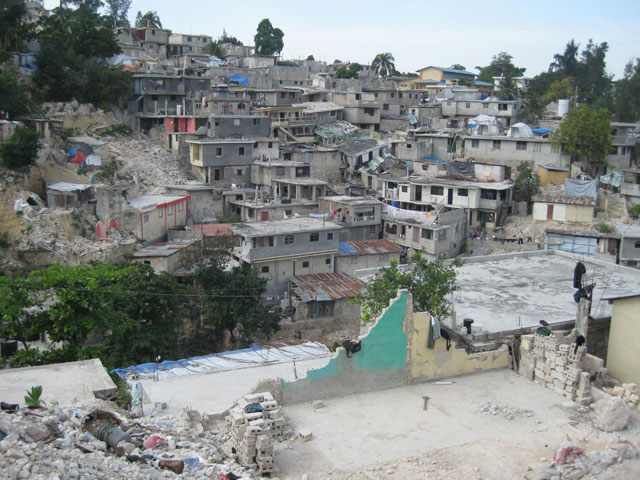 PORT-AU-PRINCE, Haiti - Far fewer people died or were left homeless by last year's devastating earthquake than claimed by Haitian leaders, a report commissioned by the U.S. government has concluded — challenging a central premise behind a multibillion-dollar aid and reconstruction effort.

The report, a copy of which was obtained Monday by The Associated Press, estimates that the death toll was between 46,000 and 85,000, far below the Haitian government's official figure of 316,000. The report was prepared for the U.S. Agency for International Development but has not yet been publicly released.

Haitian authorities stood by the figures they released last year.

Haiti: The road to recovery

The report has inconsistencies, however, and won't be released publicly until they are resolved, U.S. State Department spokeswoman Preeti Shah told the AP.

"The first draft of the report contained internal inconsistencies with its own findings," Shah said in a telephone interview from Washington. "We are reviewing these inconsistencies ... to ensure information we release is accurate."

Shah would not elaborate or say whether the report could change significantly once the inconsistencies are resolved.

Haitian government officials said they had not seen the report and could not discuss it.

Based on a statistical sampling from a hard-hit section of downtown Port-au-Prince, the report also estimates that about 895,000 people moved into temporary settlement camps around the capital after the quake and that no more than 375,000 of those are still living under tarps and in tents and wooden shanties.

Those figures conflict with numbers provided by the U.N. International Organization for Migration, which says the camp population reached 1.5 million after the quake and that there are still 680,000 in settlement camps around the capital.

The report also says there was less rubble than previously estimated. Immediately after the earthquake, the U.S. Army Corps of Engineers reported about 20 million cubic meters (26 million cubic yards) of debris, enough to fill the Louisiana Superdome five times. But the study concluded that the total is less than half that amount.

The discrepancies are more than academic: The huge death toll and widespread destruction helped justify an international outpouring of aid for the impoverished Caribbean country, including $5.5 billion pledged during a March 2010 U.N. donor's conference.

Many people questioned the Haitian government's death toll in the days after the quake. The officials released precise figures even as thousands of bodies were scooped up and dumped in mass graves in what seemed a haphazard fashion. Many more were left to decay in collapsed buildings. The government never publicly revealed its methodology for arriving at its statistics.

USAID commissioned the report through a Washington consulting firm, LTL Strategies, to get a more accurate picture of the amount of rubble to be cleared and housing that needed to be built or repaired.

The report's lead author, Timothy T. Schwartz, is an anthropologist whose previous work includes a book highly critical of the efforts of major international aid groups in Haiti. He declined comment Monday on the USAID report but said in a blog post that no one should be surprised about a revised death toll given the previous conflicting numbers and lack of justification for the official figures.

"Intellectually, I really don't care how many people got killed in the earthquake," Schwartz wrote. "The draft report for USAID was simply a job I was performing with a team of some 20 university educated professionals, including two other PhDs. But personally, for me, in terms of the tragedy, less is better. And at about 60,000 dead, that's still a huge tragedy."

The research for the report was conducted in January. Teams interviewed people face-to- face in almost 5,200 homes in densely populated neighborhoods in downtown Port-au-Prince, asking more than 100 questions, including how many people died in each building and where the survivors went.

"Undoubtedly, they have a powerful methodology," said Leonard Doyle, a spokesman for the U.N. migration organization that conducted its own census of settlement camp populations. "But we are 100 percent confident that the people we counted are living in the camps."

The report has been circulating in Haiti for the past several days.

The AP sent a copy to the office of Jean-Max Bellerive, who was prime minister during the earthquake. His adviser, Alice Blanchet, questioned the study's methodology and stuck to the figures officials released last year.

"Such extrapolation ... is hardly conclusive," Blanchet said. "The number of the dead is likely to be much closer to the official numbers provided at a time of catastrophe than the numbers suggested in the limited report."

The administration of newly elected President Michel Martelly will assume responsibility for reconstruction efforts. His spokespeople did not respond to emails Monday seeking comment.