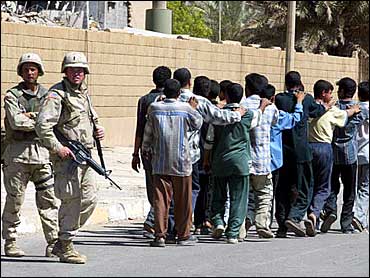 The United States asked Friday to be allowed to run Iraq for at least a year and Defense Secretary Donald Rumsfeld said there was no way to tell how long U.S. troops would be there.

Exactly a month after U.S. troops took Baghdad, the United States and Britain introduced an eight-page resolution — in which the U.S. and Britain acknowledge for the first time that they are "occupying powers" in Iraq — to the Security Council.

In it, they asked the United Nations to lift sanctions on Iraq and allow oil revenues to pay for reconstruction. Some council members, like Angola and Chile, welcomed the resolution, while Russia and France raised questions.

During a news conference with Gen. Tommy Franks, Rumsfeld referred to the authorization timeline as "just a review period" in the overall postwar plan.

"Anyone who thinks they know how long it's going to take is fooling themselves," Rumsfeld said. "It's not knowable."