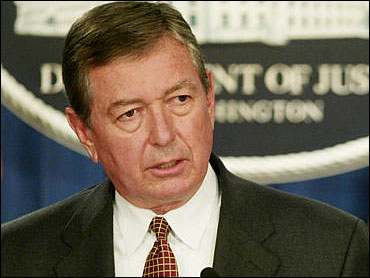 A federal prosecutor in a major terrorism case in Detroit has taken the rare step of suing Attorney General John Ashcroft, alleging the Justice Department interfered with the case, compromised a confidential informant and exaggerated results in the war on terrorism.

Assistant U.S. Attorney Richard Convertino of Detroit accused the Justice Department of "gross mismanagement" of the war on terrorism in a lawsuit filed late Friday in federal court in Washington.

Justice officials said Tuesday they had not seen the suit and had no comment.

The suit is the latest twist in the Bush administration's first major post-Sept. 11 terrorism prosecution, which is now in danger of unraveling over allegations of prosecutorial misconduct.

Convertino came under internal Justice Department investigation last fall after providing information to a Senate committee about his concerns about the war on terror. His testimony came just months after he helped convict some members of an alleged terrorism cell in Detroit.

The government now admits it failed to turn over evidence during the trial that might have assisted the defense, including an allegation from an imprisoned drug gang leader who claimed the government's key witness made up his story.

Convertino is seeking damages under the Privacy Act, alleging he has been subjected to an internal investigation as retaliation for his cooperation with the Senate and that information from the internal probe was wrongly leaked to news media.

The lawsuit states Convertino first complained to his superiors more than a year ago about Justice's interference in the Detroit terrorism trial, saying Washington supervisors "had continuously placed perception over reality to the serious detriment of the war on terror."

The lawsuit includes excerpts of an e-mail from another prosecutor in the case that Convertino says "identified some of the gross mismanagement which was negatively impacting the ability of the United States to obtain convictions in a major terrorist case."

The e-mail from the other prosecutor shows he complained at the time that efforts by Justice's terrorism unit in Washington to "insinuate themselves into this trial are, nothing more than a self-serving effort to justify the existence" of the unit.

"They have rendered no assistance and, are in my judgment, adversely impacting on both trial prep and trial strategy," the e-mail cited in the lawsuit states.

Convertino also accused Justice officials of intentionally divulging the name of one of his confidential terrorism informants (CI) to retaliate against him.

The leak put the informant at grave risk, forced him to flee the United States and "interfered with the ability of the United States to obtain information from the CI about current and future terrorist activities," the suit alleges.

The prosecutor is being represented by the National Whistleblower Center, which has represented FBI agents and other whistleblowers in recent cases involving terrorism. Its chief lawyer successfully helped Linda Tripp win damages under the Privacy Act for the leak of information from her Pentagon personnel file after the Monica Lewinsky affair.

According to Justice Department publications, Convertino has twice received commendations for his work there.

In the Detroit case, two of four Arab immigrants were convicted of conspiring to support Islamic extremists plotting attacks in the United States and the Middle East. A third was found guilty of a fraud charge, and a fourth was acquitted of all counts.

Abdel-Ilah Elmardoudi, 37, and Karim Koubriti, 24, were found guilty of conspiracy to provide material support or resources to terrorists and of conspiracy to engage in fraud and misuse of visas, permits and other documents.

Koubriti and Hannan were acquitted on two other fraud counts.

Farouk Ali-Haimoud, 22, was acquitted of all charges.

Prosecutors said the four men were working as part of a shadowy unidentified terrorist group. They said a videotape and sketches found in the raid showed potential targets were cased including Las Vegas and Disneyland, and military installations in Turkey and Jordan.

Defense attorneys said their clients were victims of overzealous federal agents who relied on the lies of an admitted con man to build a flimsy case that didn't add up to terrorism.