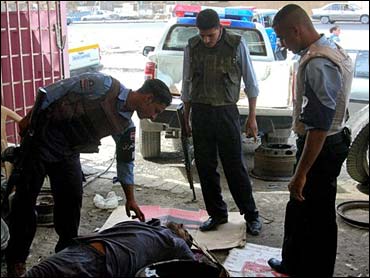 The Marines said the 16 Americans and three Iraqi contractors sprayed small-arms fire at Iraqi civilians and U.S. forces from their cars in Fallujah on May 28. There were no casualties.

"Three hours later, another Marine observation post was fired on by gunmen from vehicles matching the description of those involved in the earlier attack," Lapan said.

U.S. forces later detained the contractors without incident and held them for three days in a military jail, but no charges have been filed. The American contractors are believed to have left Iraq, and a Naval Criminal Investigative Service inquiry is under way, the military said.

President Jalal Talabani said up to 25 Sunni Muslim Arabs will be appointed to join elected lawmakers in drafting Iraq's new constitution, averting a threatened Sunni boycott of the process if they did not receive greater representation.

Meanwhile, the United States is talking with Sunni Arab leaders with ties to militant groups to try to get them to lay down their arms, an American official said. Several groups are indicating a willingness to join the political process, but more radical militants can only be dealt with by military means, he said.

"In order to achieve stability and an end to the insurgency and stop Iraqis from being killed in large numbers, the insurgency has to be addressed," the Baghdad-based official said Wednesday during a briefing on condition he not be identified.

Talabani's announcement was a victory for Iraq's Sunni Arabs, whose support is crucial for Iraq's Shiite- and Kurdish-dominated government, particularly to approve the constitution. The draft charter will collapse if three of Iraq's four predominantly Sunni Arab provinces vote against it in a referendum later this year.

"We have decided to add about 20 to 25 members from Sunnis in the committee, which will draft the constitution with full rights like other members who were elected by the parliament," Talabani said.

Two Sunni Arab lawmakers sit on a 55-member parliamentary committee drafting the charter, but Sunni Arabs felt this was too small a representation.

The Shiite-led government offered 13 extra places for Sunni Arabs from outside the parliament to help the 55-member committee draw up the constitution. No voting rights were offered to the 13, however, but the committee said it would make all decisions by consensus.

On Wednesday, however, Iraq's largest Sunni Arab organizations, the Iraqi Islamic Party and the Sunni Endowment, rejected the offer of 13, and instead demanded 25 seats with the same voting rights as the others.

It was unclear if Talabani's announcement meant any new Sunni Arab members would have the same voting rights as the original 55 lawmakers who were selected to the parliamentary constitutional-drafting committee.

The constitution must be drafted by mid-August and approved two months later in a referendum. Sunni Arab approval is needed for the charter to take effect and new elections to be held in December.