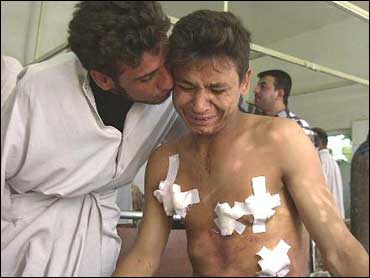 U.S. forces stepped up pressure on Shiite gunmen loyal to radical cleric Muqtada al-Sadr, pushing with tanks into the holy city of Kufa and assaulting militia positions in the narrow streets of a Shiite enclave in Baghdad. At least 34 Iraqis were killed.

The heaviest fighting in Baghdad came when militiamen from al-Sadr's Al-Mahdi Army attacked police stations and set up checkpoints in the Shiite neighborhood of Sadr City, a heavily populated district in the eastern part of the capital, Kimmitt said.