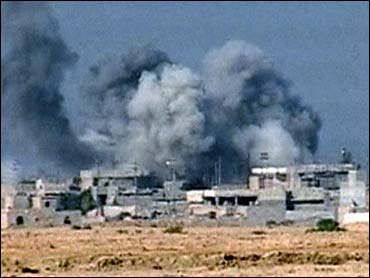 American forces pushed deeper into the southern reaches of Fallujah, cornering militants backed into smaller pockets of the city. Hundreds of men trying to flee were turned back by U.S. troops.

On Friday, Army and Marine units moved to tighten their security cordon around the besieged city, backed by FA-18s and AC-130 gunships.

Some three to four dozen militants tried to break out towards the south and east late Thursday but were repelled by U.S. troops, the military said.

U.S. forces were also positioned to the west near key bridges, blocking rebels from crossing the Euphrates River with patrol boats.

Troops have cut off all roads and bridges leading out of the city and have turned back hundreds of men who have tried to flee the city during the assault. Only women, children and the elderly are being allowed to leave.
The military says keeping men aged 15 to 55 from leaving is key to the mission's success.