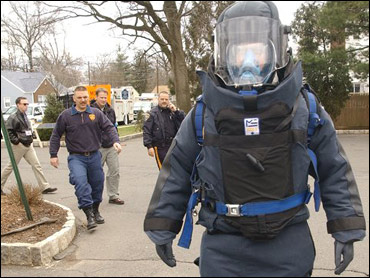 The nation is preparing for its biggest terrorism exercise ever next week when three fictional "dirty bombs" go off and cripple transportation arteries in two major U.S. cities and Guam, according to a document obtained by The Associated Press.

Yet even as this drill begins, details from the previous national exercise held in 2005 have yet to be publicly released - information that's supposed to help officials prepare for the next real attack.

House lawmakers were expected to demand answers Wednesday, including why the "after-action" report from 2005 hasn't been made public. Congress has required the exercise since 2000, but has done little in the way of oversight beyond attending the actual events.

Next week will be the fourth Top Officials exercise - dubbed TOPOFF. The program costs about $25 million a year and involves the federal government's highest officials, such as top people from the Defense and Homeland Security departments.

"The challenge with TOPOFF is not the exercise itself. It's to move as quickly as possible to remedy what perceives to be the problems that are uncovered," former Homeland Security Secretary Tom Ridge said in an interview with AP this week.

Ridge, who launched his own security consulting company on Monday, said he's a big fan of the TOPOFF exercises. But he said "it's not acceptable" that the review from the 2005 exercise is still not released publicly.

The House Homeland Security emergency communications, preparedness and response subcommittee was holding a hearing Wednesday on the terrorism exercise program.

This year's TOPOFF will build on lessons learned from previous exercises, according to the Homeland Security Department, which runs the program. The agency said the Oct. 15-19 exercise would be "the largest and most comprehensive" to date.

Local hospitals and law enforcement agencies will be involved in the "attacks" by the dirty bombs, which are conventional explosives that include some radioactive material that would cause contamination over a limited area but not create actual nuclear explosions.

"Lessons learned from the exercise will provide valuable insights to guide future planning for securing the nation against terrorist attacks, disasters and other emergencies," according to the department's Web site.

The after action report from TOPOFF 3, which deals with issues that came up in the 2005 exercise, is supposed to identify areas for improvement. That report is still going through internal reviews.

According to a brief summary of the 2005 exercise - marked For Official Use Only, but obtained by AP - problems arose when officials realized the federal government's law for providing assistance does not cover biological incidents.

The exercise involved a mustard gas attack from an improvised explosive device in Connecticut and the release of the pneumonic plague in New Jersey. This caused certain federal disaster programs to be unavailable to some residents suffering from the attack, according to the summary.

And a 2006 White House report on Hurricane Katrina criticized the department for not having a system to address and fix the problems discovered in the TOPOFF exercises.

"The most recent Top Officials (TOPOFF) exercise in April 2005 revealed the federal government's lack of progress in addressing a number of preparedness deficiencies, many of which had been identified in previous exercises," according to the White House.

Previously, a more detailed version of lessons-learned from TOPOFF 2, held in 2003 was not released to states for security reasons.