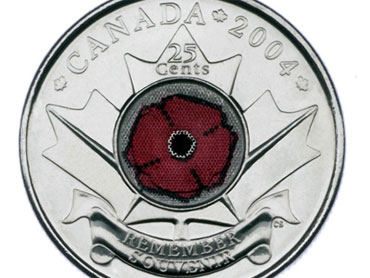 How much does the U.S. government really trust Canada? Maybe less than you think.

Espionage warnings from the Defense Department caused an international sensation a few years ago over reports of mysterious coins with radio frequency transmitters, until they were debunked. The culprit turned out to be a commemorative quarter in Canada.

But at the height of the mystery, senior Pentagon officials speculated whether Canadians were involved in the spy caper.

"I don't think it is an issue of the Canadians being the bad guys," the Pentagon's counterintelligence chief wrote in an exchange of e-mails obtained this week by The Associated Press, "but then again, who knows."

In the e-mails, released to the AP under the U.S. Freedom of Information Act with names blacked out but job titles disclosed, Pentagon officials question whether they should warn military officers in the U.S. Northern Command, who regularly met Canadian counterparts about classified subjects inside bug-proof, government meeting rooms. The rooms are known as secure compartmentalized information facilities, or SKIFs.

"Isn't the Canadian piece something that should be briefed to Northcom since the Canadians sit in their SKIFs?" asked the Pentagon's deputy director for counterintelligence oversight, in e-mails marked "Secret/NoForn."

"Good point," replied the Pentagon's acting director for counterintelligence. "It is possible that DSS (the U.S. Defense Security Service) sent their report to Northcom. Then again, I don't think it is an issue of the Canadians being the bad guys, but then again, who knows."

Canada is among the closest of U.S. allies, its continental northern neighbor and the leading oil supplier for the U.S. The intelligence services of the two countries are extraordinarily tight and routinely share sensitive secrets. President Barack Obama chose Canada as the destination of his first foreign trip, to underscore what he described as the two countries' long-standing and growing friendship.

In sensational warnings that circulated publicly in late 2006 and early 2007, the Pentagon's Defense Security Service said coins with radio transmitters were found planted on U.S. Army contractors with classified security clearances on at least three occasions between October 2005 and January 2006 as the contractors traveled through Canada.

In January 2007, the government abruptly reversed itself and said the warnings weren't true. But the case remained a mystery until months later, when AP learned that the flap had been caused by suspicions over the odd-looking Canadian "poppy" quarter with a bright red flower. The silver-colored 25-cent piece features the red image of a poppy - Canada's flower of war remembrance - inlaid on a maple leaf.

What suspicious contractors believed to be "nanotechnology" on the coins actually was a protective coating the Royal Canadian Mint applied to prevent the poppy's red color from rubbing off. The mint produced nearly 30 million such quarters in 2004 commemorating Canada's 117,000 war dead.

The Pentagon turned over the latest e-mails from inside its Office of the Undersecretary for Defense for Intelligence nearly two years after the AP requested them under the Freedom of Information Act. Many of the e-mails were censored over what the Pentagon said was national security and personal privacy.

One e-mail included a curious message on the same day the Defense Security Service publicly disavowed its warning about the spy coins. "I am guessing y'all know the status of the Canadian coin situation," it read. It called for an internal meeting "to chat about the next step to put Humpty together again" and suggested notifying the media - and the Canadians.