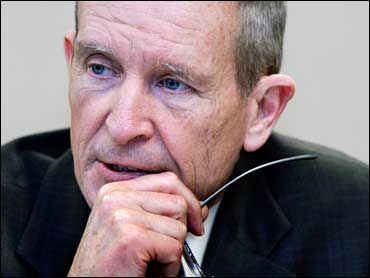 The Mexican government is not on the verge of collapse, the top U.S. intelligence official said Thursday, seeking to tamp down increasing alarm over the powerful and violent drug cartels operating in the country that is the United States' southern neighbor.

"Mexico is in no danger of becoming a failed state," said National Intelligence Director Dennis Blair at his first news conference Thursday.

Echoing the assessment of Mexico's leaders, Blair said the dramatic increase in killings in Mexico is a result of that government's crackdown on drug cartels.

A U.S. military planning report issued in January warned that the escalating violence is dangerously destabilizing Mexico and warned its government could collapse. But Blair said there is no danger of that.

Still, Bliar's pronouncement came the day after the body of a U.S. Marashal was discovered in Juarez, Mexico.

There was an active warrant for Bustamante's arrest at the time of his death for his failure to appear in court on charges of criminal theft of public property, Carter said.

Nevertheless, the Obama administration announced Tuesday that it will dispatch nearly 500 more federal agents to the border, along with X-ray machines and drug-sniffing dogs, to stop the spillover of violence into the U.S. from Mexican drug smugglers and immigrant smugglers. National Guardsmen might also be sent.

"The Mexican campaign is our campaign," Blair said.

During his news conference, Blair also said the Obama administration is still wrestling with what to do with the remaining 240 detainees at the Guantanamo Bay Naval Base, which the president has ordered closed.

Some of the detainees, deemed non-threatening, may be released into the United States as free men, Blair confirmed.

That would happen when they can't be returned to their home countries, because the governments either won't take them or the U.S. fears they will be abused or tortured. That is the case with 17 Uighers, Chinese Muslim separatists who were cleared for release from the jail long ago. The U.S. cannot find a country willing to take them, and it will not turn them over to China.

Blair said the former prisoners would have get some sort of assistance to start their new lives in the United States.

"We can't put them out on the street," he said.

Blair said the U.S. government is building dossiers on each of the prisoners at Guantanamo and is still developing the process that will determine what happens to them. Some may face criminal trials in the U.S. civilian courts and be imprisoned in U.S. jails. Others will be remanded to their home governments for continued jailing or potential rehabilitation.

The Pentagon claims more than 60 former Guantanamo inmates have been released by their home governments and are believed to be engaged in militant activities. It has not released a list of those former prisoners. Two of the top al Qaeda leaders in Yemen are former inmates, according to both al Qaeda and U.S. intelligence officials. And the Taliban's top operations officer in southern Afghanistan was released from Guantanamo in 2007, according to U.S. intelligence and military officials.

On another matter, Blair said the United States will no longer waterboard prisoners- a form of simulated drowning that was used against three alleged terrorists in 2002 and 2003. But other "enhanced interrogation techniques" are being considered for inclusion in the methods finally approved for use. He did not say what methods he would consider retaining. The CIA's enhanced interrogation program is classified. Blair is a key figure in the White House review of the CIA's interrogation program.