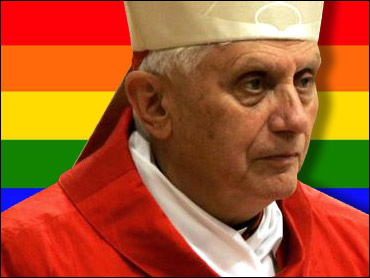 A nun who was ordered by Cardinal Joseph Ratzinger to stop ministering to gays and lesbians called his election to pope "devastating" for those who believe the Catholic Church needs to be more tolerant on social issues such as homosexuality.

Sister Jeannine Gramick said the choice of Ratzinger, who as the Vatican's guardian of doctrine silenced her and Father Robert Nugent in a 1999 order, will likely prevent the church from "moving into the 21st century and out of the Middle Ages."

"It does not bode well for people who are concerned for lesbian and gay people in the church," she said.

Gramick and Nugent founded the Mount Rainier-based New Ways Ministry in 1977. The pair ministered to gays and lesbians, held retreats, published writings on homosexuality and the church, and traveled the nation to hold workshops.

The Vatican, which disapproves of homosexuality and gay marriage, investigated the ministry for years through its Congregation for the Doctrine of Faith, a body headed by Ratzinger.

A 1999 opinion signed by Ratzinger said Gramick and Nugent's teachings were "erroneous and dangerous" and that they "caused confusion among the Roman Catholic people." Both were ordered to end their ministry. Nugent conceded but Gramick chose to continue speaking out, eventually leaving her religious order.

The two never saw Ratzinger while their case was judged, but Gramick had a chance meeting with the cardinal on a plane to Munich in 1998, taking a seat next to him. She urged him to meet with gay and lesbian Catholics so he could better understand the issue.

"What he needs to do is sit down and talk pastorally with lesbian and gay people," she said.

Gramick and Nugent are no longer affiliated with the New Ways Ministry, but the group continues to provide educational programs for gay and lesbian Catholics nationwide, said executive director, Francis DeBernardo.

DeBernardo predicted that Ratzinger would do little to reconcile with gays and lesbians whom he said feel alienated by the church.

"He is the lightening rod for anger at the church by gay and lesbian people," DeBernardo said.