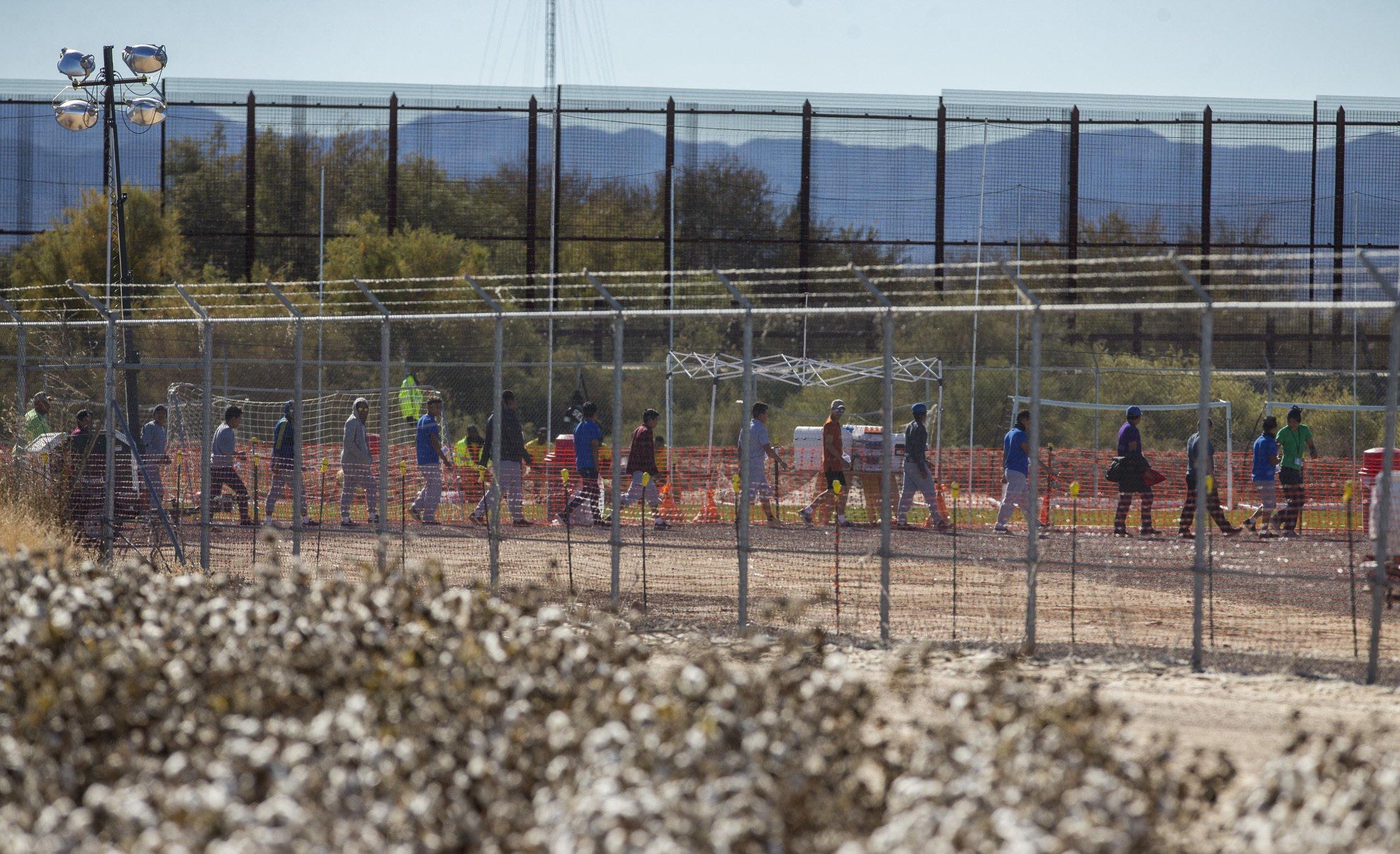 TORNILLO, Texas — The Trump administration announced in June it would open a temporary shelter for up to 360 migrant children in this isolated corner of the Texas desert. Less than six months later, the facility has expanded into a detention camp holding thousands of teenagers — and it shows every sign of becoming more permanent.

By Tuesday, 2,324 largely Central American boys and girls between the ages of 13 and 17 were sleeping inside the highly guarded facility in rows of bunk beds in canvas tents, some of which once housed first responders to Hurricane Harvey. More than 1,300 teens have arrived since the end of October alone.

Rising from the cotton fields and dusty roads not far from the dark fence marking the border between the U.S. and Mexico, the camp has rows of beige tents and golf carts that ferry staffers carrying walkie-talkies. Teens with identical haircuts and government-issued shirts and pants can be seen walking single file from tent to tent, flanked by staff at the front and back.

More people are detained in Tornillo's tent city than in all but one of the nation's 204 federal prisons, yet construction continues.

The camp's population may grow even more if members of the migrant caravans castigated by President Donald Trump enter the U.S. Federal officials have said they may fly teens from the caravans who arrive in San Diego directly to El Paso, then bus them to Tornillo, according to a nonprofit social service provider who spoke on the condition of anonymity because he was not allowed to publicly discuss the matter.

An Associated Press investigation has found that the camp's rapid growth has created serious problems, including:

— None of the 2,100 staff are going through rigorous FBI fingerprint background checks, according to a government watchdog memo obtained exclusively by AP. "Instead, Tornillo is using checks conducted by a private contractor that has access to less comprehensive data, thereby heightening the risk that an individual with a criminal history could have direct access to children," the memo says.

— Costs appear to be soaring more than 50 percent higher than the government has disclosed. What began as an emergency, 30-day shelter has transformed into a vast tent city that could cost taxpayers more than $430 million.

— The government is allowing the nonprofit running the facility to sidestep mental health care requirements. Under federal policy, migrant youth shelters generally must have one mental health clinician for every 12 kids, but shelter officials have indicated that Tornillo can staff just one clinician for every 100 children, according to two immigration rights advocates who spoke with AP.

— Federal plans to close Tornillo by New Years' Eve will be nearly impossible to meet. There aren't 2,300 extra beds in other facilities. A contract obtained by AP shows the project could continue into 2020 and planned closures have already been extended three times since this summer.