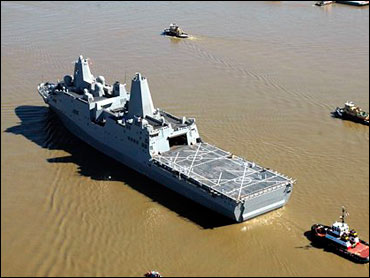 Two U.S. Navy vessels - a nuclear-powered submarine and an amphibious ship - collided before dawn Friday in the mouth of the Persian Gulf, one of the world's most important sea passages for oil supplies.

There was no damage to the sub's nuclear propulsion system and no disruption to shipping in the strategic Strait of Hormuz, through which a fifth of the world's oil passes, said Navy spokesman Lt. Nate Christensen, with the Bahrain-based 5th Fleet.

Still, the unusual collision between members of the same navy sparked a sudden rise in oil prices - which had been declining on the day - even though the strait remained open.

Benchmark crude for April delivery had traded lower for most of the morning, but then erased those losses and rose 39 cents to $52 on the New York Mercantile Exchange. In London, Brent prices rose 50 cents to $51.17 on the ICE Futures exchange.

Still, with pressure pulling prices down in the financial crisis, the rise was nowhere near what would have been expected months ago, when such a collision would likely have sent prices skyrocketing.

The incident occurred around 1:00 a.m. local time Friday (5 p.m. EDT, Thursday), when the USS Hartford, a submarine, and the USS New Orleans, an amphibious ship, collided into each other in the narrow Strait of Hormuz, the 5th Fleet said in a statement.

According to the Bahrain-based 5th Fleet, 15 sailors aboard the Hartford were slightly injured but able to return to duty. No injuries were reported aboard the New Orleans and both ships are currently operating under their own power.

"The spill is closely monitored," Christensen said. "The lightweight diesel, although obviously a fairly substantial amount of gasoline, likely dissipated in the ocean."

Military analyst Loren Thompson of the U.S.-based Lexington Institute said a collision between two vessels in the world's most sophisticated navy is nearly unheard of. It's more common for ships of different navies to collide, or military vessels and commercial ships, he said.

"It's almost inevitable that people are relieved of duty pending investigation," Thomson told The Associated Press by phone. "These sort of accidents are so uncommon that you have to take it for granted that a major mistake occured by one of the vessels' captains."

Both ships were heading to port and were going in the same direction when the incident occurred in the narrow Hormuz, said Christensen. He said the submarine was submerged at the time but that he could give no further details as the collision is still under investigation.

Hormuz at its narrowest is 34 miles wide but the location of the collision was not disclosed.

As much as 17 million barrels of oil a day went through the narrow strait in the first half of 2008, or about 40 percent of all seaborne traded oil or 20 percent of all oil traded globally.