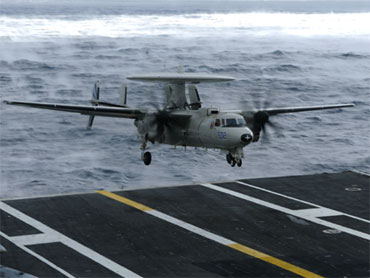 A U.S. Navy aircraft crashed in the Persian Gulf region on Wednesday and one of the four crew members was missing, the military said.

Search and rescue efforts were under way, the U.S. Navy said in a statement. Three crew members were rescued.

The E-2C Hawkeye, which is primarily used to detect incoming aircraft with its 24-foot diameter radar, crashed in the North Arabian Sea after the it "experienced mechanical malfunctions," the statement said.

The plane was used for command and control functions and operated from the aircraft carrier USS Dwight D. Eisenhower.

Helping in the search for the missing crew member were the Eisenhower and several of its aircraft, helicopters from guided missile destroyer USS Carney and a replenishment ship.

The Navy is investigating.

The E-2 Hawkeye is a twin engine and turboprop plane that can carry up to five crew members.