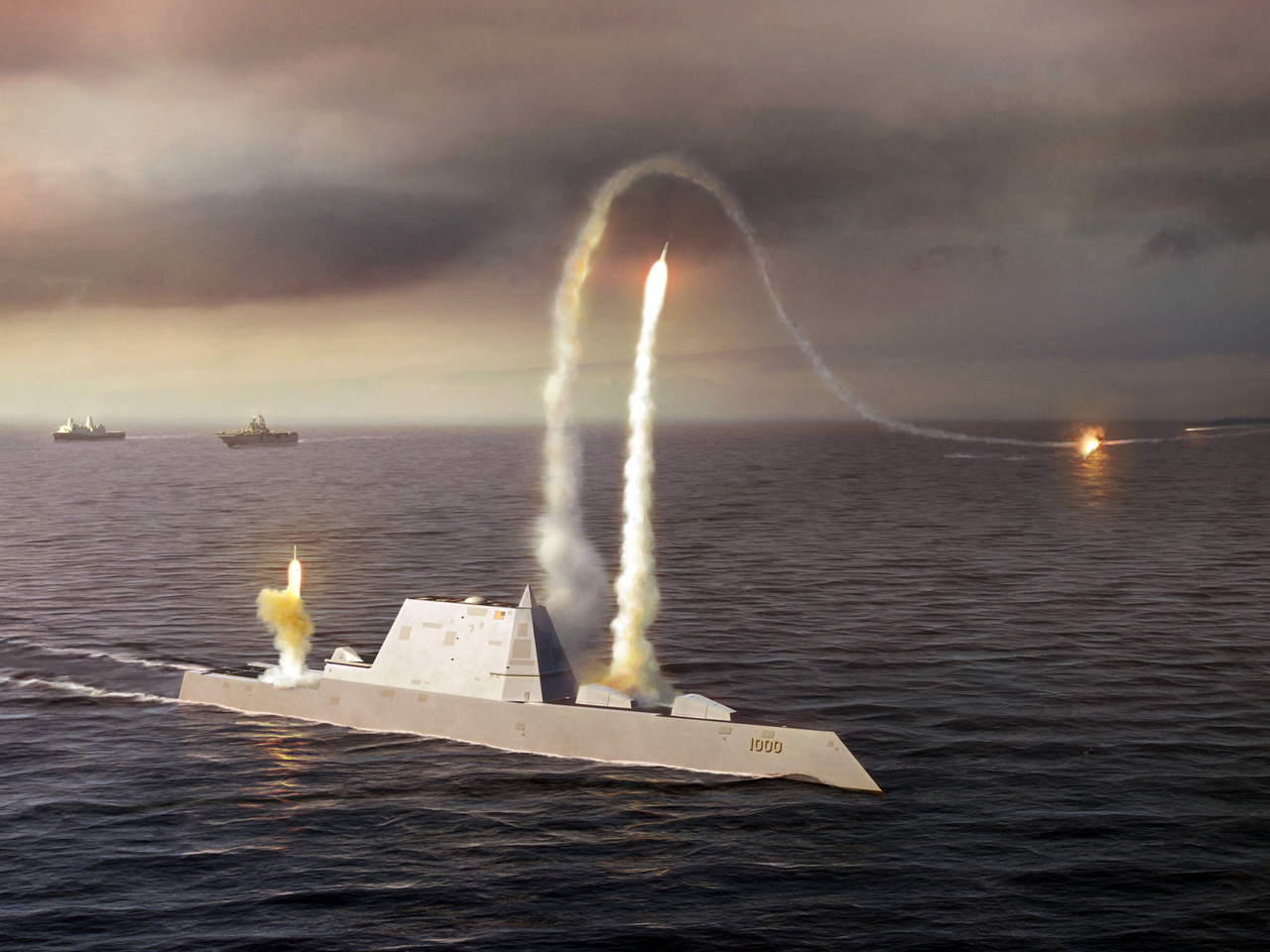 (AP) BATH, Maine - An enormous, expensive and technology-laden warship that some Navy leaders once tried to kill because of its cost is now viewed as an important part of the Obama administration's Asia-Pacific strategy, with advanced capabilities that the Navy's top officer says represent the Navy's future.

The stealthy, guided-missile Zumwalt that's taking shape at Bath Iron Works is the biggest destroyer ever built for the U.S. Navy.

The low-to-the-water warship will feature a wave-piercing hull, composite deckhouse, electric drive propulsion, advanced sonar, missiles, and powerful guns that fire rocket-propelled warheads as far as 100 miles. It's also longer and heavier than existing destroyers — but will have half the crew because of automated systems.

"With its stealth, incredibly capable sonar system, strike capability and lower manning requirements — this is our future," concluded Adm. Jonathan Greenert, chief of naval operations, who gave the warship his endorsement on a visit last week to Bath Iron Works, where the ships are being built.

The General Accounting Office expressed concerns that the Navy was trying to incorporate too much new technology. Some Navy officials pointed out that it's less capable than existing destroyers when it comes to missile defense, and a defense analyst warned that it would be vulnerable while operating close to shore for fire support.

Even its "tumblehome" hull was criticized as potentially unstable in certain situations.

The 600-foot-long ships are so big that the General Dynamics-owned shipyard spent $40 million to construct a 106-foot-tall building to assemble the giant hull segments.

And then there's the cost, roughly $3.8 billion apiece, according to the Navy's latest proposed budget.

Including research and development, the cost grows to $7 billion apiece, said Winslow Wheeler, director of the Straus Military Reform Project at the Center for Defense Information in Washington.

Because of cost, the originally envisioned 32 ships dipped to 24 and then seven. Eventually, program was truncated to just three. The first, the Zumwalt, will be christened next year and delivered to the Navy in 2014.

But Greenert told reporters that the ship fits perfectly into the new emphasis on bolstering the U.S. military presence in the Pacific in response to Asia's growing economic importance and China's rise as a military power.

Greenert didn't go into detail on how the new ship could be used. But the Defense Department has expressed concerns that China is modernizing its Navy with a near-term goal of stopping or delaying U.S. intervention in a conflict involving Taiwan. China considers the self-governing island a renegade province.

Defense officials also see a potential flashpoint in the South China Sea, where China's territorial claims overlap with those of other countries including Vietnam, the Philippines and Malaysia.

The Zumwalt's new technology will allow the warship to deter and defeat aggression and to maintain operations in areas where an enemy seeks to deny access, both on the open ocean and in operations closer to shore, the Navy says.

Jay Korman, industry analyst with The Avascent Group, said the warship uses so much new technology that it's viewed by the Navy as a "silver bullet" answer to threats. The only problem is the cost.

"They were looking to introduce so many new technologies at once, and the cost ballooned," he said. "I don't think people have changed their minds that it's a capable ship. It's just too expensive."

Unlike another new ship entering the Navy's arsenal — the small and speedy "littoral combat ship" — the Zumwalt will be heavily armored and armed.

The Zumwalt's 155 mm deck guns were built to pound the shore with guided projectiles to pave the way for the Marines to arrive in landing craft, and they're far more cost-effective in certain situations than cruise missiles, said Eric Wertheim, author of the "Naval Institute's Guide to Combat Fleets of the World."

Down the road, the ship could one day be equipped with an electromagnetic railgun, a powerful weapon that uses a magnetic field and electric current to fire a projectile at several times the speed of sound.

Production will stop after three ships, and the Navy will go back to building tried-and-true Arleigh Burke-class destroyers, 510-foot-long ships featuring a versatile Aegis radar system that's being modified for ballistic missile defense. Even with modifications, the ships will cost far less than the Zumwalt-class ships.

For Bath's 5,400 workers, the Zumwalt has been both exciting and challenging, with a new design and new construction techniques. In the coming months, workers will take delivery of the composite deck house and helicopter hangar, which are being built at the Huntington Ingalls shipyard in Mississippi. Those will be placed on the Bath-built hull.

"If anybody can do it and do it successfully, then I'm confident that's us," said Jay Wadleigh, vice president of Local S6 of the Machinists Union in Bath.