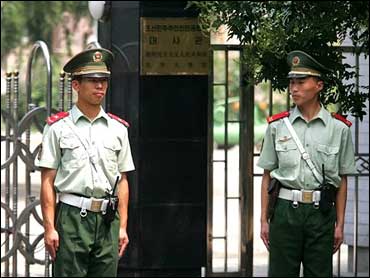 U.S. and North Korean negotiators held a rare one-on-one meeting Monday amid a flurry of contacts between delegations to the six-nation talks aimed at persuading the communist nation to relinquish its nuclear program.

Individual meetings between envoys from the two Koreas, the United States, host China, Japan and Russia took place as the group prepared to resume formal talks Tuesday after a gap of more than a year.

The U.S. and North Korean delegations met behind closed doors at the Diaoyutai State Guesthouse for about an hour and fifteen minutes, the official Xinhua News Agency reported.

The American Embassy did not immediately release details of the meeting, but the U.S. envoy, Assistant Secretary of State Christopher Hill, said earlier the two sides were "just trying to get acquainted, review how we see things coming up and compare notes."

Referring to Tuesday's talks, he said: "We are looking forward to working hard and trying to make some progress." He did not say what progress Washington hopes to make.

Hill said Sunday he didn't expect the meetings this week to be the last set of negotiations on the Korean nuclear dispute. He said the process is "going to take a lot of work."

Earlier this month, Seoul offered a new incentive for the North to negotiate — 2 million kilowatts of electricity by 2008 if it agrees to dismantle its nuclear weapons.

The leader of Japan's delegation, Kenichiro Sasae, called the nuclear issue "central" to talks, but said he would make "utmost efforts" to address the North Korea's past abductions of Japanese citizens, according to Japan's Kyodo News agency.

The last round of six-nation talks ended in June 2004 without major progress toward a settlement of the dispute.

The conflict erupted in late 2002 when the United States said North Korea had admitted running a nuclear program in violation of an earlier agreement. In February, the North claimed it had nuclear weapons. It hasn't conducted any known nuclear test explosions, but experts believe it has enough weapons-grade plutonium for about a half-dozen bombs.