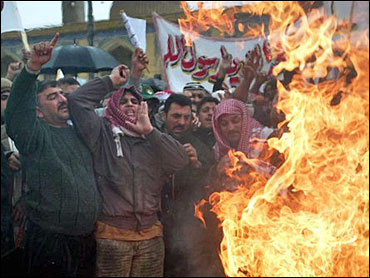 The State Department criticized on Friday cartoon drawings in Europe of the Prophet Muhammad, calling them "offensive to the beliefs of Muslims."

While recognizing the importance of freedom of the press and expression, department press officer Janelle Hironimus said these rights must be coupled with press responsibility.

"Inciting religious or ethnic hatred in this manner is not acceptable," Hironimus said. "We call for tolerance and respect for all communities and for their religious beliefs and practices."

The 12 cartoons first appeared in a Danish newspaper in September and were reprinted in several European newspapers this week in a gesture of press freedom. When the cartoons were first published five months ago, though, the controversy was low-key, CBS News correspondent Richard Roth reports. Boycotts were called against Danish goods in the Middle East. But the anger spread fast.

One of the drawings shows Muhammad wearing a turban shaped as a bomb. Another portrays him holding a sword, his eyes covered by a black rectangle.

Hard-line Muslims in Indonesia stormed a building housing the Danish Embassy and burned the country's flag Friday to protest the caricatures, as outrage over the drawings rippled across Asia.

Rowdy demonstrations were held in Bangladesh and Malaysia, where crowds chanted: "Destroy our Enemies!"

In Indonesia, the world's most populous Muslim nation, 150 demonstrators pelted the high-rise building housing the Danish Embassy with rotten eggs, then pushed their way past security guards.

Before leaving the building in the heart of the Indonesian capital's business district, they tore down the Danish flag and set it on fire.

"We are not terrorists, we are not anarchists, but we are against those people who blaspheme Islam," a protester wearing a white Arabic-style robes shouted outside the building.

"This is about insensitivity and a trend toward Islamaphobia," said foreign ministry spokesman Yuri Thamrin.

"As a democratic country we are very aware of press freedom, but we also believe it should not be used to slander or defame sacred religious symbols."

In Iraq, thousands staged demonstrations after weekly mosque prayer services on Friday. About 4,500 people joined rallies in Basra and hundreds at a Baghdad mosque. Danish flags were burned at both demonstrations.

"We strongly denounce and condemn this horrific action," Iraq's top Shiite cleric, Grand Ayatollah Ali al-Sistani, said of the caricatures in a statement posted on his Web site and dated Jan. 31.

In Pakistan, where insulting the prophet is punishable by death, President Gen. Pervez Musharraf also expressed outrage, saying there was no way to justify publication of the cartoons.

"I have been hurt, grieved and I am angry," the military leader said, adding that those who printed the cartoons were "totally oblivious of what is happening in the world."

Moderate Muslims were also offended, Musharraf said, and felt their faith had been demonized.

Earlier, Pakistani lawmakers called the drawings blasphemous, then passed a resolution condemning them as hurting "the faith and feelings of Muslims all over the world."

The resolution urged the government to take unspecified "economic and political actions to prevent uncivilized behavior" by the European media that printed the drawings.

In mostly Muslim Malaysia, about 60 members of the opposition Pan-Malaysian Islamic Party demonstrated outside Denmark's Embassy in Kuala Lumpur demanding the Danish government stop newspapers from reprinting the drawings.

"It's an uncivilized act, it's heinous," Hanifah Maidin, the party's youth chief, said after submitting a letter of complaint to Danish officials.

In Bangladesh, about 500 Muslims rallied outside a mosque after Friday prayers, and the top Islamic advisory body in Singapore said the drawings had no purpose other than to "incite hatred."

"No one is allowed to ridicule or cast aspersions on the faith of a people under the cloak of free expression," the Islamic Religious Council of Singapore said in a statement.

Indonesia has 220 million people, most of them moderate Muslims, but Friday's protest was among the first held in the sprawling archipelago over the cartoons.

Fearing more in the days ahead, Foreign Minister Hasan Wirayuda urged restraint and said he had asked police to upgrade security at embassies in Jakarta, the capital.

Those who took part in Friday's rally were members of the Islamic Defenders Front, which campaigns for Islamic law and often takes to the street against perceived violators of Islamic rules at home or abroad.

Three protesters said they were received by the Danish ambassador, and claimed he told them he planned to apologize to Indonesian Muslims for causing offense.

"If he doesn't, then we will demand the government kick him out," said protest organizer Ali Reza.

Meanwhile, Danish Prime Minister Anders Fogh Rasmussen called a meeting Friday to detail the government's position and actions in the matter. He reiterated his stance that the government cannot interfere with issues concerning the press. More than 70 ambassadors attended, including those from predominantly Muslim Egypt, Turkey, Iran and Lebanon.

Egypt's ambassador said that Rasmussen's response to the Muhammad drawings controversy has been inadequate and that the country should do more to "appease the whole Muslim world."

Mona Omar Attia said after meeting with Fogh Rasmussen that she will urge diplomatic protests against the Scandinavian country to continue.

The Islamic reaction in Europe has been muted compared to the scenes of rage in countries like Pakistan, Indonesia and Saudi Arabia, where demonstrators have burned Danish flags.

Demonstrators marched from a London mosque toward Denmark's Embassy on Friday to protest the newspaper caricatures.

British Foreign Secretary Jack Straw criticized the decision to republish the cartoons, saying that while freedom of speech should be respected "there is not any obligation to insult or to be gratuitously inflammatory."

"I believe that the republication of these cartoons has been unnecessary, it has been insensitive, it has been disrespectful and it has been wrong," he told reporters.

French President Jacques Chirac on Friday urged respect and reason when dealing with religious beliefs, in response to caricatures of the Prophet Muhammad that have incensed Muslims in France and worldwide.

Chirac met Friday with Dalil Boubakeur, head of the French Council of the Muslim Faith. "France, a country of secularism, respects all religions and all beliefs," he said, but added that "the principle of freedom of expression constitutes one of the foundations of the Republic."