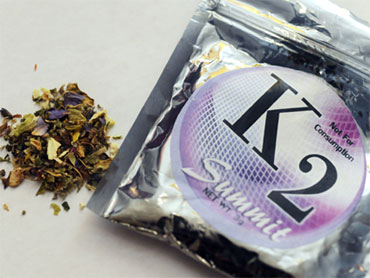 Cracking down on fake pot, the government moved Wednesday to outlaw five chemicals used in herbal blends to make the synthetic marijuana sold in head shops and on the Internet to a growing number of teens and young adults.

Responding to the latest designer drug fad, the Drug Enforcement Administration began the 30-day process to put these chemicals in the same drug category as heroin and cocaine. The agency acted after receiving increasing reports about these products since 2009 from poison centers, hospitals and law enforcement agencies.

The five chemicals mimic THC, the active ingredient in marijuana, and aren't approved by the Food and Drug Administration for human consumption.

But ultimately, Carreno said, the blends are smoked like real marijuana to produce a high and are making users across the country sick.

The DEA action, posted in the Federal Register, would outlaw the five chemicals 30 days from now "to avoid an imminent hazard to the public safety." Fifteen states have already acted to ban or regulate one or more of these chemicals.

Crowdsourcing the Price of Marijuana

The DEA said it first became aware of these new designer drugs in November 2008 when the U.S. Customs and Border Protection agency analyzed "Spice."

As of Sept. 27, the American Association of Poison Control Centers has reported receiving more than 1,500 calls from 48 states and the District of Columbia about products spiked with these drugs, the DEA said.

John W. Huffman, a retired organic chemistry researcher from Clemson University, first developed three of soon-to-be-banned compounds as part of his research sponsored by the National Institute on Drug Abuse in 1993. He said Wednesday the chemicals were never intended to be used by people.

Huffman said the compounds were developed to study how compounds that mimic THC but have very different chemical formulas interact with the brain. Huffman said they were only tested in animals.

"They are dangerous and anyone who uses them is stupid," Huffman said in a telephone interview from his Sylva, N.C., home.

Huffman said there have been reports of overdoses, suicides, hallucinations, seizures and cases of addiction.